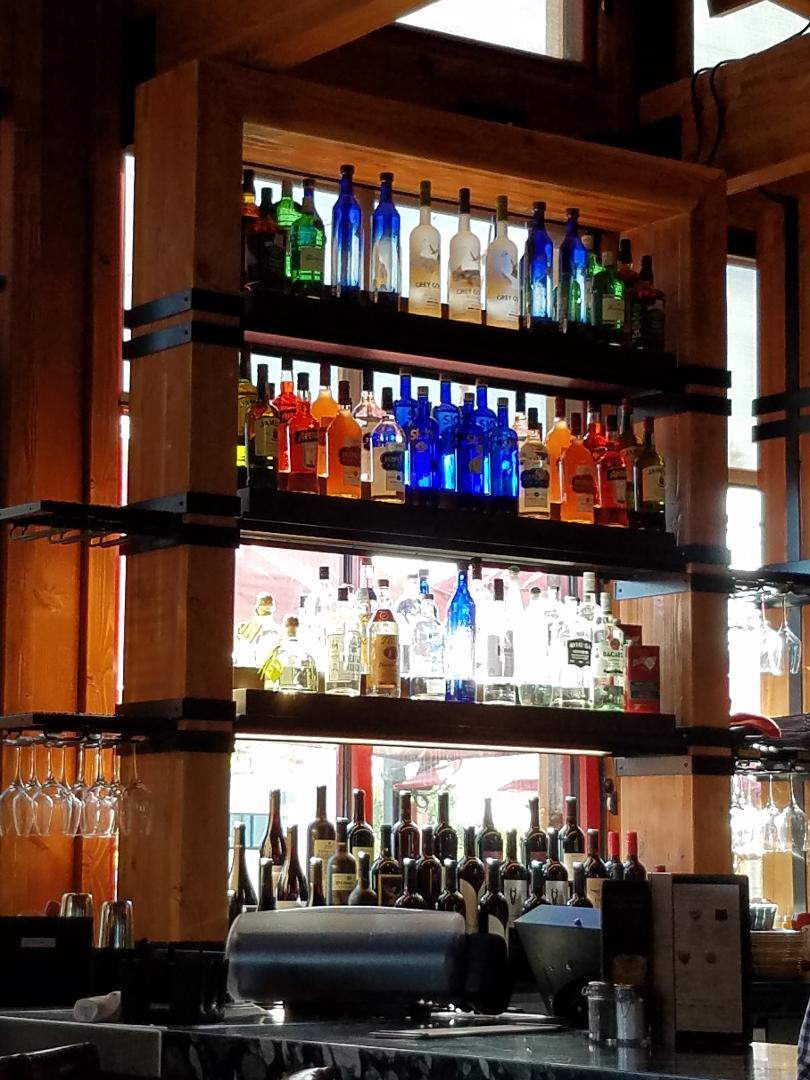 Okay, maybe nothing, but hear me out.

David, Ryan and I sat in a restaurant’s bar area eating dinner, and this shelving unit of alcohol was in my direct line of sight throughout our entire meal. At first, I noticed how pretty all of the bottles were, lit up by the daylight outside. Then I thought…wait a minute, those bottles of alcohol are direct recipients of intense, southwestern-exposure sunlight — that can’t be good. They aren’t in this light for a few minutes or even an hour. We’re talking about hours of intense sunshine beating down on them every damned day.

As it was, we were eating around 4:30 PM and the temperature outside was 96 degrees on September 26. So far, we’ve only had one day this month when the high was below 90 degrees. Most of our highs have been 95 and above this entire month. I know! Crazy, huh? And it wasn’t like the windows in the restaurant had some kind of protective coating on them either. Nope. So the bottles were pretty, yes, but won’t that kind of light and heat do damage to what’s inside those pretty bottles? I know heat can hurt wine, and there were wine bottles on the bottom shelf, but what about your vodkas and whiskeys and gins, etc. I know we keep our liquor stored in a dark, liquor cabinet.

The more I stared at the restaurant’s alcohol display, the more I started thinking about another restaurant we frequent. Their bar not only keeps their alcohol out of direct sunlight, but just as importantly, away from any windows. Period. Matter of fact, at night they lock their bottles up in what amounts to metal cages; so even if they were burglarized, at least their alcohol would be protected. I mean talk about a place that has their priorities straight!

Staring at the display shelf at this restaurant, those expensive bottles started looking more and more like bait to me. An enticement for thieves. Thieves who could easily break in from the outside and just reach in for a quick smash and grab during the middle of the night. Which makes me wonder — what does their insurance company have to say about this? I know if it were up to me, I wouldn’t insure them.

I asked our waiter about my concerns and he just giggled nervously and then started questioning me. He said that now that I mentioned it, I might have a point. Said he’d never thought about any of that before. He thought it was interesting that I’d given this so much thought. Why was I interested, again? I told him that David and I were in the insurance business and I didn’t think this was a smart business practice. That seemed to appease his suspicions about me, hopefully. Still, he didn’t have any answers.

I hate to be left hanging; but never fear, I turned to trusty Google to get at least one of my questions answered. You can read the article I found on the proper storage of spirits here. AH HA! I was right that displaying bottles of alcohol in strong sunlight wasn’t a good idea. Oxidation? Yuk! Who wants to drink an oxidized mojito? Not me! But that’s not what I worry about most.

What if I’ve inadvertently set things in motion? I mean, our waiter appeared to be honest and hardworking enough; but weren’t his eyes a little…shifty? I mean who knows these days.

Damn. I’m going to feel pretty bad if I said the wrong thing to the wrong person and he does the unthinkable now that I’ve pointed out to him how easy it would be for someone to break in and steal bottles of alcohol. Well, I guess it’s not unthinkable if I thought about it. Somehow that doesn’t make me feel any better. Anyway —

All I’m saying is: if it all goes down — a middle-of-the-night heist, that is — may his haul be spoiled by innumerable hours of brutal heat and oxidizing sunlight!

Cheers, y’all! Friday is finally here! I hope all my Wayward Friends have a safe but fun weekend! Shall we get this party started with a little music?