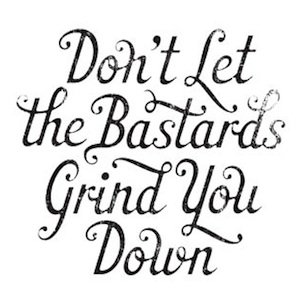 If I try hard enough, I think I can remember a time in my life when I got along with everyone. Nope, there’s always been someone, some crazy SOB that’s prevented this from happening. Let me re-phrase.

If I try hard enough, I think I can remember a time in my life when I thought I could get along with everyone. Boy was I naïve!  Those innocent days have long vanished, taking my youthful looks and trim figure with them. What I’ve discovered is, and I think my former therapist Ellen might agree, I somehow inadvertently get tangled up now and again with crazy people doing bullshit things.

Dealing with unnecessary lunacy used to upset me to no end – but I’ve recently put time limits on that – progress!  Unfortunately though, when bat-shit-crazy happens: in between my initial WTF-just-happened?!!! shock  and my self-imposed “upset time limit,” I tend to drive myself nuts trying to figure out how I managed to get caught up in some foolish person’s madness. Did I set myself up somehow? How could everything have gone sideways?

The answer is: there is no answer. Regardless of why crazy people and craziness happens in my life, and even though each new situation may look unique, deep down underneath it all – it’s the same ol’, same ol.’

Because of the chaos and stress this brings, I’ve devoted a good deal of my life trying to control my all-encompassing mind explosion as I try to make sense out of the OMG of what someone else said and did. I think my downfall occurs when I engage in insidious thoughts that crop up Monday-morning-quarterback-style – might I have been able to control or thwart the person or situation before damage was done?  Now that’s real crazy − diagnose-able delusions of grandeur crazy − but even so, this doesn’t stop my mind from processing its exhaustive, internal questions – keenly aware of the irony this presents.

My ultimate goal then is to: recognize crazy and escape if at all possible, certainly skip past the trying-to-figure-it-out part, and go straight on to not-bothered-by-it.

I’m not there yet.

The le fou du jour is another ridiculous instructor. Her classroom is the realm of “I’m-the-Queen-Bee-here-and-it-doesn’t-matter-if-what-I-say-and-do-doesn’t-make-any-sense, I’m calling the shots, peasant, so kneel down and kiss my boots or off-with-your-head! WEE!”

I wouldn’t exactly call me a rabble-rouser, but I’m much better at poking at absurdity than kneeling and kissing boots. I figured, what the hell – I’d try to stay under the Queen’s radar, but if not, what did I need my head for anyway?

No surprises – the Queen wasn’t into independent thought.

What I hadn’t anticipated was that the Queen would send me a nasty, insulting email accusing me of absurd and untrue things that could undermine me as a student. I’ve dealt with a lot of sonofabitch instructors over the years, but I’ve never been accused of the lies this woman wrote.

I discussed this with several trusted advisors aka friends, of course. They were unanimous in their responses: 1) this crazy instructor was way out of line; and 2) get as far the hell away from her as I possibly could.

I decided I had many options – combinations of options:

Here’s what I did:

First, I got the adrenaline out of my system by writing the Queen a long, logical letter in my defense (which my readers would find tedious and I won’t be sharing.) In it, I explained in detail how and why she, the Queen, was an idiot, a godawful instructor and a mean and nasty human being. This fulfilled my internal processing which, apparently, I still have to go through – though, I still haven’t decided whether to send the letter or not.

The next day, I filled out the required form at school and dropped her class. Impulsively, I asked the front-desk clerk if the dean was around – I’d like to have an informal chat. She told me the dean was out but would be in the office the upcoming week. I told her I’d be back.

Then I took my son out to celebrate! Ding, dong, the Queen witch was dead to me – figuratively speaking!

You’d think that with all the time I devoted to processing this instructor’s stupidity out of my system and excising her from my existence, that would be that! The only thing left was to have a brief discussion with the dean and maybe send the Queen my response. I should be at peace. So why was I not? How annoying.

I’ve been second-guessing myself. By involving the dean, am I not just perpetuating chaos? Ditto for sending tit-for-tat emails or letters? Also, I’d like to finish my education without getting a reputation as a whiner. And the last thing I want to do is give even the whiff of gravitas to her laughable lies.

So I’ve been trying a different approach. Several things have helped me get through this trying moment:

“People are often unreasonable, illogical and self-centered − forgive them anyway.

If you are kind, people may accuse you of selfish, ulterior motives − be kind anyway.

If you are successful, you will win some false friends and some true enemies −  succeed anyway.

What you spend years building, someone could destroy overnight − build anyway.

If you find serenity and happiness, they may be jealous − be happy anyway.

The good you do today, people will often forget tomorrow − do good anyway.

from The Rules for Being Human (by Cherie Carter-Scott)

Something Professor Kennison explained to our class when he was asked − as a counselor, how do you deal with crazy or mean, vindictive people or people who have committed abominable acts – people you don’t even like but who are still your clients? How do you keep their craziness from becoming a problem for you?

I wish I’d written Dr. Kennison’s words down verbatim, but this is basically what he said:

I look at the person before me as someone who is having problems. We all have problems. It doesn’t matter what the problem is, this person is a person and deserves compassion and encouragement. We all do. That is what I focus on. Then it doesn’t become a problem for me to work with anyone. But this is how I was raised, so that’s always been my perspective.

Also, I document everything very carefully.

With these perspectives swirling around in my head, I decided that I needed to look at this situation and instructor differently. Why should dealing with a professor be any different than dealing with a client in counseling if they’re both engaging in ridiculous thoughts and behavior? We’re all just people who have problems.

So instead of sending the Queen a letter picking on her faults and telling her why she is wrong about oh-so-many-things, I thought: What if I were to write the instructor a letter I could actually send her and not get in trouble? I wanted to do the following:

This is what I wrote:

After receiving your email, I felt I should respond. I want you to know that I hope you get better − because if you do get better then perhaps you’ll feel better − and if you feel better, then perhaps you’ll gain a different perspective and different approach and become a happier person − which will not only benefit you − but will also benefit those who are around you and who you teach – which will connect you with your true purpose − and then you’ll be able to make a glorious difference – which will make the world a much better place for your having been here. But the first step is just to get better − so I hope you get better. This will be my ongoing prayer for you.

Also, in light of the tone of your email, I hope that it makes you a little happier to know that I’m withdrawing from your class. I know that makes me happier.

Respectfully and kindly yours,

I liked my letter so much that I modified it to:

Get Better, A Prayer

I want you to know that I hope you get better − because if you get better − then perhaps you’ll feel better − and if you feel better − then perhaps you’ll gain a different perspective and a different approach and become a happier, healthier person − which will not only benefit you − but will also benefit others – which will connect you with your true purpose − and then you’ll be able to make a glorious difference – which will make the world a much better place for your having been here.

But the first step is − just to get better. So I hope you get better. This will be my ongoing prayer for you.

This … prayer … doesn’t just apply to the Queen, it applies to me, as well. This is exactly what I’ve needed to master “dealing with crazy” along with various other lessons I’ve been struggling with nigh on 50 years! And you know what?

I feel much better.

Until next time, Sparkle On, Wayward Friends! And for those of you who need this prayer but also need a little something extra to keep in mind while going through a difficult time, remember:

Which is Latin for “Don’t let the bastards get you down!”