Apparently, Boo over at Welcome to My Little Corner of the Institution…Surviving This Thing Called Life

thinks I’m fun and nominated me for this award, which if I accept, I have to display on my blog. 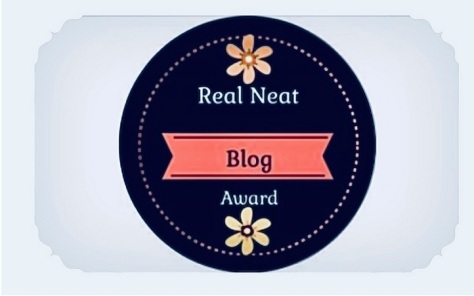 After you display the Real Neat Logo on your blog, you’re then supposed to thank the blogger who nominated you and post a link to their blog, which I already posted above, but now I’ll thank her and post it a second time just in case you missed it the first time around. So here it is ~

THANKS BUNCHES, BOO! I THINK YOU’RE A LOT OF FUN, TOO!

After that, I’m supposed to answer the seven questions the nominator asks me. Boo’s questions are:

1.) What are some of your guilty pleasures that you’re willing to admit?

I’LL ADMIT TO DING DONGS, AND I’M NOT SAYING ANYTHING MORE.

2.) As of right now, if you were to die, what would you leave me in your last will and testament? Why or why not?

I’d leave you the answers to these questions, duh! Because you asked. However, I’m giving them to you now cuz I’m not spending the money to have the attorney change my will so that your name goes in it. Love ya, but…sorry!!!! When I die, don’t expect a call or anything in writing. I’ll miss you, though! 🙁

3.) Would you be willing to take on River’s Mad Momma Squirrel and her passel of babies? She would deliver.

No, but only because we have vicious, terrible pets. We have two dogs and four cats. River’s Mad Momma Squirrel would not like it here and I would fear for her babies. Also, we have a much hotter climate.

4.) If I were to summon you via black magic, which 5 items would I need in each corner of the pentagram? No goats allowed.

Boo?!!!!! What the what?????!!!! Okay, in order to summon me by black magic, you’d better have Jesus Christ in one corner, Mother Mary in the other, and the archangels Michael, Gabriel and Raphael in the others. Otherwise, I ain’t coming. Not no way, not no how!

I would be the flavor of deliciousness. You ask why, I ask why not?!

6.) When you poop in a public toilet do you hover, build a nest, or just sit down?( I actually answered this one on a radio call in. What was my answer? I blogged it)

Ew, gross. No one wants to know that! Why, Boo, why did you answer this and why are you asking? I’m going to keep a little of the mystery. ‘K?

7.) If someone was filming your life up to this point, what would be on the soundtrack and what is the title?

After that, you get to nominate other bloggers. Since Boo nominated five, I’ll nominate five as well, but I think you can nominate whoever and however many or few people you want:

Kat from Angel Who Swears

Lastly, you’re supposed to ask your nominees seven questions, which are:

Okay, I’m never as creative as say Boo when coming up with questions that include things like summoning people in a black magic ritual or wanting details on behavior in a public bathroom, but that’s the best I could do for now. I hope you accept this much coveted award, give great answers to the questions and come up with even better ones when you nominate others to spread this joy into their lives!

As always, a little music for your enjoyment! It’s summer. Might as well let your hair down and party, y’all!

Lastly, to my dear friend, Jan,