About three weeks ago, I woke up, got dressed and went to retrieve my gold wedding band that I take off at night and leave on my nightstand while I sleep. My ring wasn’t there. It wasn’t on the floor. It wasn’t in the bed, on my finger, or anywhere on or near my nightstand or bed. My ring was simply nowhere to be found.

But guess who was there?

Since July 15 when we acquired Buddy, the sulfurious farting dog, he has chewed up, destroyed or eaten the following:

Yes, you heard me right. My wedding band! 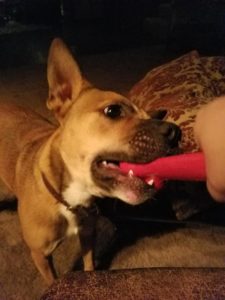 Buddy has chewed up or eaten all of these things in spite of the numerous and expensive chew toys he has, including his favorite — a Kong, big, red, rubber bone that Buddy constantly has in his mouth. This particular toy is virtually indestructible, which doesn’t stop Buddy from trying and eventually succeeding at turning it into tiny rubber bits, most of which he eats. It takes many hours and a good month for him to wear it down, though. He is now on his second Kong bone and I need to go and replenish because this one’s getting a little too chewed up at this point.

It seems like Bud is either gnawing on his hard rubber bone or that he’s sticking it into my hand, trying to get me to play with him. This toy is always covered in slimy dog slobber but, even so, Buddy wants me to do the following: wrassle it away from him in a vicious game of tug-of-war, which often requires brute strength, distraction, dirty tricks and his letting me win — but only so I will throw it so he can then go chase and retrieve it. This is what Buddy lives for. We go through this about a million times a night while I’m watching TV. Who says I don’t get a helluva workout while watching the NCIS’s; Chicago Med, Fire and P.D., and the various sitcoms and British mysteries I watch throughout the week?

About my wedding band — this has a bit of a back story to it. Ten years ago or so, I woke up in the wee hours of the morning to find that my ring finger was starting to turn an odd color as my wedding band cut off circulation. Of course, I started panicking because it was on tight and my finger was continuing to swell and the ring did not appear to be interested in coming off. At that point, a weird, claustrophobic sensation set in and it occurred to me that the ring HAD to come off or I was going to die. So between Crisco and a lot of twisting and pulling and screaming, David and I eventually worked it off — my memory is that a little surface skin might have come off as well. After cleaning up the Crisco mess and calming down, I put the ring on my bedside table and went back to sleep. I was exhausted but thankful that we got the damned thing off without having to go to extreme measures, like cutting my ring off or getting my finger amputated. This same scenario played out more or less the same way, but without the panic, once more, a week or two later.

That’s when it dawned on me that I could no longer wear my ring at night. I don’t know why wearing it during the day has never been a problem. At least there’s that. It slips on and off just fine. However, at night, my fingers swell, apparently, and I’m not interested in waking up one morning to find that my appendage died while I was asleep; so I’ve adjusted. I’ve taken my ring off (gold band) right before I get into bed for the last ten years, give or take. Then I put it on my bedside table right before I turn out the light, and it goes back on my finger after I’ve had my shower and dressed in the morning. I feel naked without it on. In bed, I don’t mind. Walking around in public, that’s not a good feeling.

Now to be fair, I didn’t actually see Buddy snatch my wedding ring off the nightstand or swallow it. However, he is the only one who has eaten and/or chewed up/chewed through non edible things in our home — usually things that belong to me. Buddy didn’t deny it either. He was laying next to my side of the bed when I discovered my ring missing and he looked up at me with those big, brown eyes that said, “Uhm, but it was shiny. It looked delicious and I had to eat it. Plus, you didn’t play with me at 3:00 AM this morning like I wanted you to do, so you deserved to have your ring eaten. Ha!”

Passive/aggressive little shit! I started noticing that every time I didn’t do something this damned dog wanted me to do, I’d find something I valued chewed up the next morning. Not cool! You are not going to convince me this dog doesn’t know what he’s doing. He is quite adept at Revenge 101.

That was the day that I made the phone call.

I talked to Steve at the facility. My daughter reluctantly gave me the number to call, telling me she hoped it wouldn’t come to this, and that given a little more time, maybe Buddy would learn not to chew. After the ring incident, though, she told me, “Do what you’ve got to do. Here’s the number.”

No, it wasn’t that kind of facility. Though, at this point, Buddy is lucky to be alive and still in our home. That’s when you know you truly love your pet — when he’s eaten/mangled your very expensive things, including your wedding ring, and you haven’t beaten him, kicked him out or sent him away to be destroyed. And as much as I wanted to kill him at the moment I realized he’d eaten my ring, Buddy remains abuse-free and alive in our home — cuz I wuvs him — and he’s such a good boy, ‘cept when he isn’t! BAD, GOOD DOG! BAD, GOOD DOG! God, I’m so confused.

Lauren told me that this place came highly recommended and had a good reputation for training dogs but that it was expensive. Yep, that kind of facility. And Lauren was right. Steve explained that it was only going to cost us a mere $1,400 to get Buddy trained. David just laughed and shook his head no. And here’s the kicker — because Buddy is a young dog, less than four years old, according to Steve the dog trainer, he wasn’t going to be able to train Buddy to not chew up our things. So Steve can teach Buddy to stay and heel and sit, but he can’t train him not to be passive/aggressive.

Steve’s words of wisdom to me were, “You need to crate him whenever he can’t be right next to you.”

“Well, it’s not during the waking hours, mostly, that presents a problem,” I argued. “It’s at night when we’re asleep and he is right next to me!” I answered back.

“Then he needs to be in a crate at night,” Steve reiterated.

“But that seems…harsh,” I said.

“Hey, it’s your stuff. That’s what I would do if he were my dog and had that problem,” Steve argued back.

And I couldn’t argue with that.

So, yeah, David and I went to look at crates but we couldn’t agree on which one to get. I wanted to get Buddy the biggest one they had. David thought I was being ridiculous. We left the pet store without making a decision. Eventually, David went back and bought what he thought best. It’s a perfect fit. Not too big. Not too small. Thank God for David!

Since then, I’m pleased to announce that we haven’t had any more of our things destroyed. Knock on wood! However, I’m the one who has to put Buddy in his crate at night. Whenever David comes near, Buddy runs under the bed. Of course, Buddy’s tried that nonsense once or twice with me as well — but so far, I’m still smarter than Buddy and I’ve been able to get him to walk into his crate of his own volition with just an encouraging word or two. Damn, though — he always looks miserable and ashamed whenever I put him in there. He’d much rather be in bed with us or next to me on the floor or even under our bed. He pleads for mercy with those eyes of his. He promises he won’t chew anything up anymore. His eyes say that he’s learned his lesson and please, please don’t make him go back in the crate! I tell him that in about two years, we’ll see.

I am such a bad dog mom. But for the fact that Buddy ate my WEDDING RING, the guilt would eat me alive. However, feeling naked all day long is not a good feeling — and that assuages whatever feelings of guilt I have that pop up.