I’ve always had long hair. Well, not when I was born, obviously, but from a youngster throughout my teens and into my adulthood. Other than a couple of perms back in the 80’s (who didn’t have a perm back then?), I’ve not dyed, bleached or colored it since. It’s never been too thick or too thin. My hair was something David really appreciated and he would tell me whenever I’d ask if I should cut it, to keep it long. Like so many other things, I took my hair for granted when I was younger.

Now that I’m in my mid 50’s, my hair’s starting to go silver. One of these days, my brown hair with it’s copper and golden undertones and highlights will be completely silvery gray. I’ve never thought of myself as vain, but I miss my old hair. One of these days, I’m sure I’ll just miss having hair. It feels like there’s a race going on — will my hair turn completely silver/gray/white first or will I lose it all first?

Know what my hair looks like now? Well, it’s a wisp of itself. Here’s what I cleaned out of my brush after one good brushing. It’s as big as my mouse. 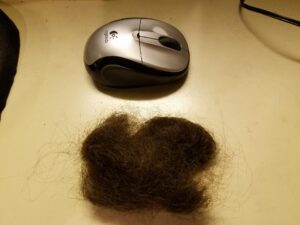 I know, it looks like a small, furry animal, which is what our cat, Birdie, thought it was. It’s her toy now.

More than thirty years ago, an old friend braided his long hair into a ponytail and then cut it short. Unless he’s gotten rid of it, his braid sits in a shoe box somewhere among his other important keepsakes, where he can visit his crowning glory and think about his hippie youth.

I started thinking about all of this when I braided my hair after I brushed it. It may still be long, but it doesn’t have the thickness and luster and fullness it once had. I’m losing hair both in quantity and in the thickness of each strand. Rapidly. It’s fairly depressing. I’m thinking about doing what my friend did and just cut it all off. These days, I usually just wear it in a bun, anyway.

Other Uses For Human Hair 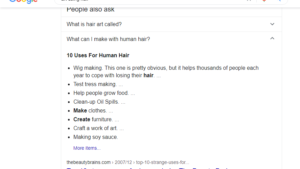 At the rate I’m losing my hair, I should be bald by the end of this year. If I were a gambler, I’d put my money on going bald before going completely silver. Unfortunately, for me, either way is a losing deal.

So what should I do with all of the hair not on my head? Should I save it and use it for something purposeful? I think making clothes and furniture is out. Growing food or using it to make soy sauce?! Ew. I don’t want to even know what that’s about. Also, it’s probably too late to try and use whatever’s left to make myself a wig. Too bad. Maybe I’ll pass on that thought to my daughter about her own hair. I’ll have to think about that. In the meantime, Birdie’s having fun with this last batch from my brush.

Hair loss is more socially accepted for men; but women lose it, too! In our family, David and Ry both have thick, gorgeous blonde locks. Lauren and I, however, both brunette, struggle to keep what little we have intact. As if we had any control.

What Do You Miss?

We grieve so many things throughout our lives. One of the things we sometimes grieve is something like losing our hair or going gray aka aging. Is there any feature you had when you were younger that you dearly miss as you age?