On Saturday, we celebrated Father’s Day with David’s side of the family so I could celebrate Father’s Day with my Dad on Sunday. It was good to see so many we haven’t seen since last Thanksgiving. Also, the food was delicious, as always! There were barbecue ribs and a huge pasta salad and cornbread and Lauren made banana pudding!

Then there was the bug zapper.

Okay, I’ve seen bug zappers (like the gif at the top), but I’d never seen a bug zapper like this one. It looked like a cross between an electrified tennis racket and an oversized fly swatter. The idea, I suppose, is that if a fly/mosquito/gnat/June bug is buzzing around in your general area, all you have to do is swing this thing  — this fly swatter on steroids. If you have decent enough aim, you’ll hit the flying bug and zap it.

When I say zap it, of course, I mean electrocute the shit out of the creature, and it will fall dead to the ground.

Someone chased a flying insect throughout the dining room/living room area. With all of the excitement that ensued, you’d have thought they were on a fox hunt; which, let me be clear, I’m very opposed to fox hunts. Instead of being in the wilds of Great Britain, though, we were in a house in rural Texas, not riding horses and not wearing fox-hunt riding clothes, there were no dogs and the fox in question was actually a fly. But the spirit of the chase was there. Well, and the “fox” was a fly before making contact with the swatter.

Then it was a fried fly.

Squeals of delight and cheers by family members who had temporarily lost their ever-lovin’ minds filled the room.

Of course new gadgets that spark like a miniaturized Tesla coil upon contact and make satisfying popping noises that also kill annoying flying pests (presumably those that crawl as well) have an awe-inspiring tendency to do that — cause people to temporarily lose their minds, that is. Battery operated and only $24.99 at Amazon, too! 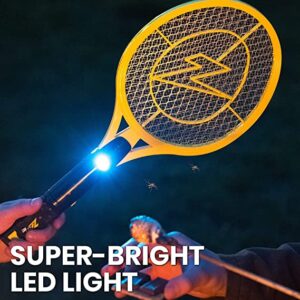 Poor fly. I hope it didn’t feel it even though it sounded as if it might have. Couldn’t really tell because of the loud popping noise from the large spark and then the sounds of human delirium.

Also, I’m on record as saying, I was rooting for the fly. (I can’t believe I rooted for a fly!)

I was alarmed how bloodlust seemed to spark in usually docile family members. The cheering, the intensity, the gleam in their eyes…it was downright scary. Is this what happened during gladiator games back in the day? Normal, sweet people — who typically wouldn’t hurt a fly on the wall — turned into bloodthirsty lunatics who not only would, but could and did? Even Lauren, my beautiful daughter who is a friend to all animals and is violently opposed to…violence…who has been known to move spiders from inside the house to the outside (out of harm’s way), was enthralled.

That wasn’t the worst of what happened. Unless you were the zapped fly.

Our grandson decided to do something that can only be described as insane. He’s the grandson in the family who graduated from Texas A&M. Yep, he’s an Aggie. So that might explain some of this. Maybe.

At the time, I was outside with David, who was sitting around a campfire in 100 degree-plus  heat. I know. In retrospect, nothing about this day made much sense. However, I saw him sitting outside by the campfire and went to check on him to try to ascertain why he was doing this crazy thing…sitting by a fire in intense heat…when he didn’t have to! Why?!!!

As I’m standing next to David in utter bewilderment (this is an entirely different story, btw), Lauren comes outside and says that we have to come in because our grandson, the 23-year-old Aggie grad who now makes great money as a videogame developer, is about to touch the bug zapper…WITH HIS BARE HANDS. He’s worked up the courage to do this and he would like our attendance, please.

David, who had settled into his chair out in the heat, wasn’t going anywhere. His thought was if someone needed him, they knew where to find him. I, on the other hand, wanted to know what the blue-blazes was going on and why our incredibly smart grandson would do something so…stupid! Plus, at this point, any excuse to get out of the heat was welcome. This was as good of an excuse as any.

So I get inside the house, where his mom, aunts, sister, fiancé, and cousins are gathered around him. I figured he wasn’t going to do anything WILD AND CRAZY LIKE TOUCH HIS TONGUE TO THE DAMNED FLY ZAPPER!

Right before he did it, his aunt looked at me and said, “I don’t think this is such a good idea.”

Before anyone could do anything, though, grandson touched his tongue to the zapper; and it did what it was intended to do — it zapped the shit out of him. He fell to the ground. FELL. ON. HIS. FACE. I saw him touch his tongue to the stupid thing and the huge spark it made and his cry of pain before he went straight down.

He was zapped just like that fly earlier. Everyone was stunned silent.

My hands automatically flew to my face.

His mom said, “No. Just give him some space.”

“Well, shouldn’t you at least check on him?” someone else said.

“What am I supposed to do?” his mother said as she dried the dish in her hand. She looked concerned but seemed to be taking a wait-and-see approach.

I remained frozen and speechless as I took all of this in.

Then our grandson got up laughing.

Okay, that was bad enough; but apparently, everyone in the house watching knew he was fine but me. While I’d been outside, they’d plotted and, presumably, test drove their plan before David and I were called in.

Since David didn’t join me, I, alone, had been pranked.

“Why?” was my question. It wasn’t the first nor the last time I’d ask this question on this day.

Their explanation was simple: they wanted to find out what I’d do.

I sat in horror. That’s what I did. And I probably lost at least two years of my life in the process. I don’t know if that makes me a wise grandmother to have just sat still or just a bad grandmother for not having reacted in anything other than sheer terror. They’re lucky I didn’t pee myself and the chair I was sitting on. Just saying, it could have happened.

“You know you’re all going to hell for this, don’t you?” I said to the room.

That brought on more squeals of laughter and delight!

“And YOU, BOY CRYING WOLF,” I said pointing at my grandson, “You are going to really be hurt one day and no one’s going to believe you, but I’m glad you aren’t hurt today!” Then I gave him a big hug or maybe he gave me a big hug. The point is, we hugged!

Eventually, David came in from the heat. It was explained that the bug zapper might look like it would hurt a person, but it, apparently, only will hurt insects. I still don’t understand this.

The damned zapper sparked a few more times before we left. Each time, I jumped. Each time, they laughed.

Wicked senses of humor…all of them! I’m so proud they were able to “get me good” even if I now have a touch of PTSD and have lost precious years off of my life! BRATS, ALL OF THEM…BUT BELOVED BRATS!

Needless to say, by the time I got home and into bed, I was utterly…zapped!

CARRY ON IN YOUR OWN BADASS WAY AND HAVE A GREAT START TO SUMMER, WAYWARD FRIENDS!