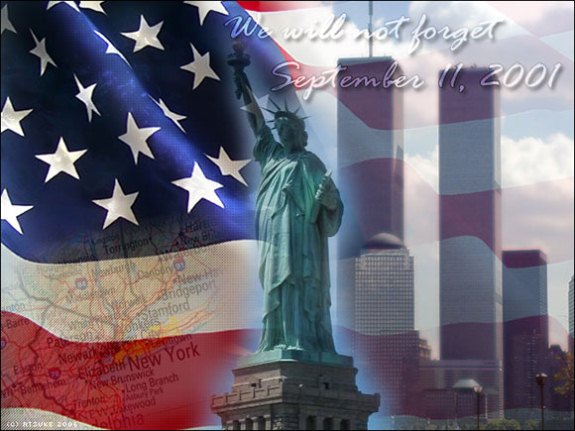 If you were alive and aware on this day in 2001, you know exactly what you were doing − that’s how our minds work. We remember where we were − our space in time in a larger space in time − whenever we live through life-altering events. When John F. Kennedy was shot, it was the same thing. People who were old enough to understand what happened, also remember where they were whenever they recall that moment. I wasn’t alive then.

On September 11, 2001, my day was spent mostly staring at the television in shock. But even before the event, I remember going to the grocery store super early around 5:00 a.m. and getting groceries and buying fresh flowers. I remember getting the kids off to school on what I thought was a perfectly normal morning. It was going to be a busy day and I wanted to get ahead of it before I ended up getting behind schedule.

Just before 8:00 a.m. CST, I was arranging flowers in a vase when my husband, David, told me to come into his office. The TV was on. “You’ll never believe what I just saw,” he said. “Here, watch this!”

We watched take after take after take of the first plane as it slammed into one of the World Trade Center towers, and we wondered how that could have ever happened. Were the pilot and co-pilot not watching where they were going or did the plane malfunction or, surely, this wasn’t intentional, was it? I remember watching as the second plane hit as it was happening in real time and thinking − This isn’t an accident. Our country is under attack and we’re at war.

I told him, “Today, I have no problems. Maybe yesterday and maybe tomorrow, but not today.”

Faced with the grim reality of what was going on, my problems seemed insignificant. This was an odd first meeting with this therapist because it was exacerbated by the crisis happening. The first meeting is where you get to know one another and get a feel for whether this person who you will be building a trust relationship with will be conducive to helping you figure out issues. We talked briefly about what was happening in New York. I remember the therapist telling me that his wife was in New York and that he couldn’t get in touch with her because the phone lines were jammed, but he wasn’t worried. He’d said that she was smart and he knew she was safe. So he was ready to get down to business as usual.

Really? So what did he mean by that? Did he believe that the people who were killed were not smart and that it was in some way their fault? What did smart have to do with anything when it came to dealing with something so terrible? I thought that either this shrink doesn’t give a shit about his wife or he’s a damned liar or that he’s just trying to stay busy so he doesn’t panic. How could anyone know their loved one was safe on this day if they were in New York? Hell, I didn’t feel safe here in Texas. I thought we were being attacked and this was the beginning of an all-out assault on our country. I remember thinking, I’ll be damned if I come back to see this therapist.

Afterward, I remember going up to my kids’ schools and checking on them. The schools didn’t want any of the kids to know what was going on so they weren’t letting parents visit. That made sense. It was good to know that all was right in our children’s worlds for just a few hours longer.

I remember talking to my friend Corey, who was also my daughter’s Girl Scout Leader, and telling her that life as we knew it had just changed forever. I cried. I remember canceling our Girl Scout meeting that was supposed to be taking place at my home that evening − making the phone calls to all of the parents.

I remember trying to explain to my kids what had happened when they came home from school. They were ten and twelve at the time. It didn’t register with them. It wasn’t any more real for them than watching a movie. I let them watch the footage of the buildings coming down. They thought it was “awesome.” But then, they didn’t know that people had lost their lives. In the movies, people lose their lives but, then, come back to star in different movies. It confuses reality. What happened in New York wasn’t even close to being the same thing. For my kids, however, their world was the same − school, home, dinner, friends. No one they knew had died. There weren’t any plane crashes around us. They were sorry that people had died; but they couldn’t really empathize with something for which they simply had no experience or understanding. They were spared the true awfulness and what that meant. They knew what had happened, but they were okay.

Over the next several days, we had to slowly get back to business as usual − get our routines back – honor the past but continue moving forward. I’m sure that’s what the therapist who was ready to get back to business two hours into this crisis understood. Still, it’s one thing to be a kid and be mostly oblivious to what is happening outside your sphere of existence, it’s quite another thing to be an adult and to go on with business as usual when you have a loved one in the midst of the horror and you cannot reach them. If you can, then you’re in denial.

Eleven years ago today, especially if you were an adult, life changed dramatically. The day was spent examining, questioning, wondering and, yes, worrying − putting those things that could wait on hold (meetings, appointments, superfluous stuff); while making sure the important things got done (the kids got fed and put to bed on time and that we said our prayers.) It was not a day like any other day nor should it have been thought of or acted upon as such. It was a day to put the little things aside and ponder the much bigger questions. It was a day to pray and to mourn.

Mostly, though, I remember how sad and helpless I felt for all of those people in New York, Pennsylvania, and Washington D.C., realizing that as I sat watching the TV, this was really happening and there wasn’t anything I or anyone else could do about it. I remember calling my brother in Chicago and calling my parents who live in a city much closer to me. All of my loved ones were safe. Still, we were in shock. I remember thanking God that my husband and children were home with me. And I remember wondering: What next? Were we entering WWIII? The TV took on special significance as we waited for answers.