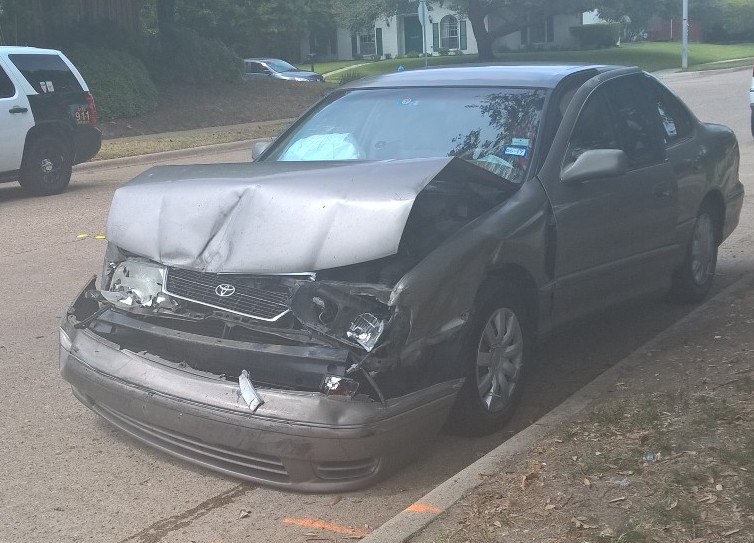 Lauren was in her car. She was driving down the road.

Oh no! Look out, Lauren! The blue car on that side street is not stopping at the stop sign!

Edgar was late for work. He was in a hurry.

Edgar ran the stop sign in his blue car. He drove his car in front of Lauren’s car!

Lauren tried to stop. She could not stop in time!

See Edgar run away like the coward he is in his red shirt!

The police came to help Lauren.

The fire truck came to help, too!

The firemen cleaned up the crash on the road.

The tow truck took the crashed cars away to the city pound.

The police spotted Edgar running away in his red shirt.

Edgar lied and said that he was not driving the blue car.

Edgar sat in the back of the police car with the door open.

Lots of people saw what Edgar had done. They pointed him out to the police officer while Edgar sat in the police car.

The policeman wrote it all down. He made a report.

Edgar was driving without a driver’s license. Edgar fled the scene of the car crash he caused. Edgar lied.

Edgar is going to jail.

Lauren had to go to the doctor because she was in a car crash.

Her body hurt. Lauren’s mom and dad took her in their car.

The doctor checked Lauren out.

The doctor said Lauren will feel bad for several days, but she would be okay.

Lauren’s car will not be okay.

Lauren will have to get a new car. It will cost her a lot of money.

Edgar’s insurance company will have to pay Lauren a lot of money.

It is good Lauren was not hurt too badly.

It is good Lauren did not kill Edgar when she crashed into his car.

It is good the police caught Edgar running away.

It is good that Edgar was in the police car so Lauren’s mother did not kill Edgar with her bare hands.

Let’s see how far Edgar can run sitting in a jail cell!

Sit your sorry ass down. You are not going anywhere, motherfucker!