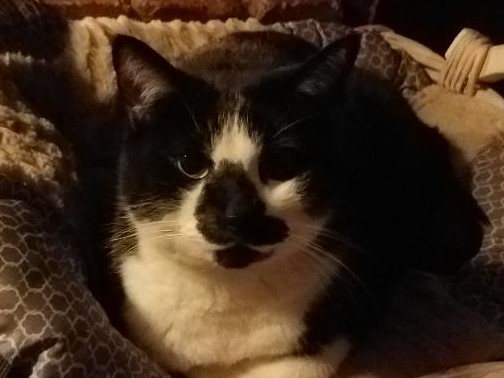 Our kitty-boy, Growleth, is needing everyone’s prayers right now. He’s only eight years old, but he started feeling poorly this past week, so I took him to the vet this morning. Growleth hates the vet but is so sick that he didn’t even try to fight me when we got there. It’s his kidneys, y’all. They’re going to try and flush them out and, hopefully and prayerfully, his kidneys will start functioning again in the next two days. So basically, he’s in the vet/hospital until at least then.

Growleth has been a family member since 2009, and he is the sweetest kitty-boy ever with a great big, asymmetrical subcontinent shape on his face (at least that’s what we tell him!) His vet called him “stoic” and was impressed that even though it was clear that he was feeling rotten, he was doing his best to muster up a purr for her while being super cooperative during his examination.

Anyway, I believe in the power of prayer and good thoughts, so I’m reaching out to everyone. Home just isn’t the same without him and we’d like him feeling much better asap.

Please let our family know we can count on you for your prayers. It would mean the world to us!

3 thoughts on “Prayers for Growleth Needed”