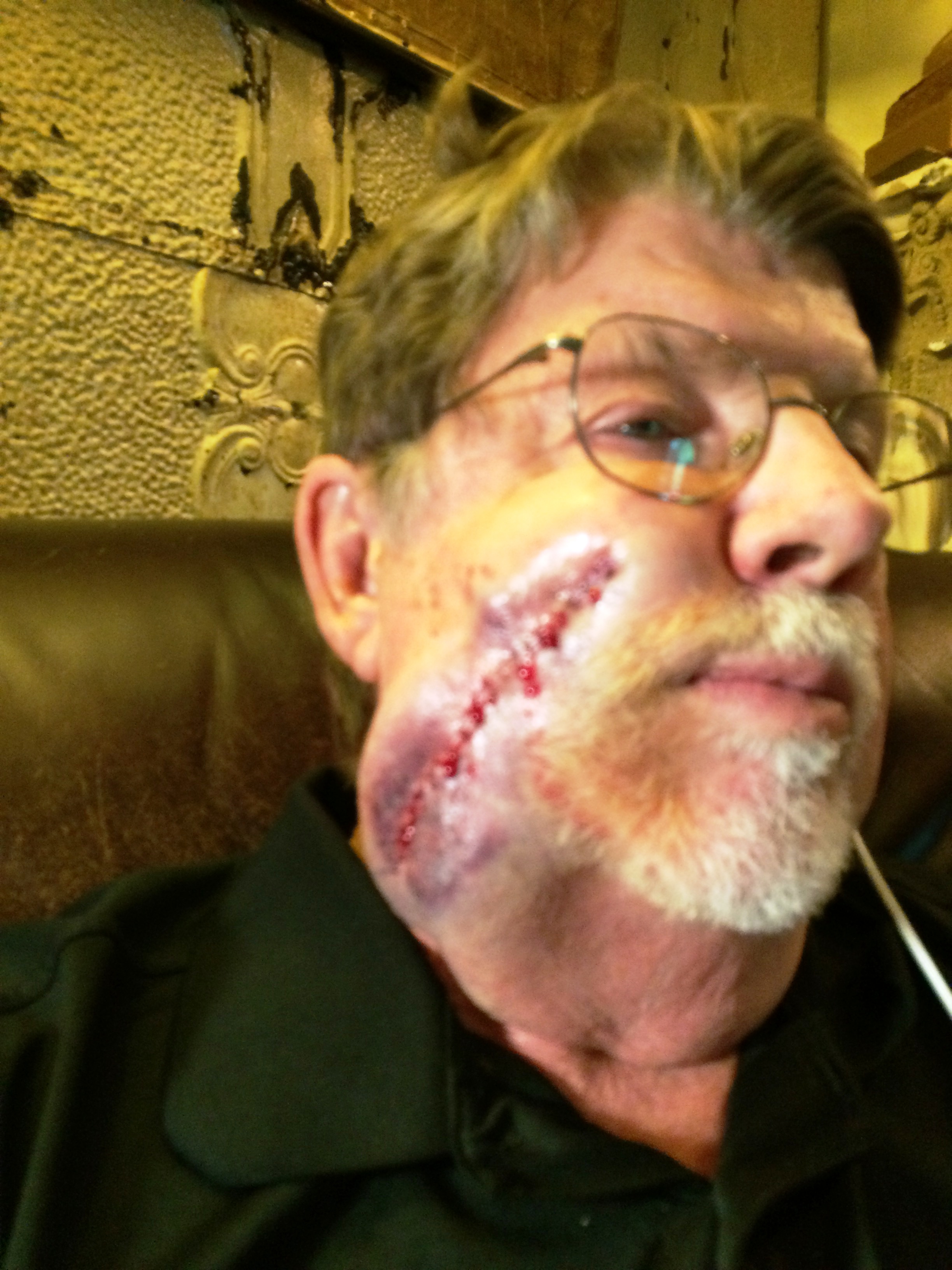 So this is what I’ve been doing this past week:

David, of course, came back with, “T’is but a flesh wound!” This is one reason I love my husband so much!

This is what he looked like about an hour after the plastic surgeon was finished with him. Yes, that is blood oozing through his sutures. Yes, he does look like someone beat the shit out of him with a 2×4. No, this is not a snapchat picture with a filter on it. This is his un-retouched, unfiltered, fucked-up face. He actually looked worse the following day, but this picture is still pretty gruesome. I’ve actually thought about showing people his picture and telling them this is what happens when you piss me off! I will cut you! I’ve rethought saying this though — only because I’m afraid people will actually believe I did this to him. Then again, maybe that’s not such a bad idea.

As of this writing, the swelling and bruising have started to dissipate, but he has since developed a suspicious lump or hard knot around the bottom of his suture. My son’s doctor, the one who saw my son this Monday morning, thinks David’s lump is something to be concerned about − like maybe David’s developing an abscess that is becoming infected and will need to be drained, especially since he’s not presently taking any antibiotics. She recommended we get back in touch with his surgeon. Promptly. The good news is that he hasn’t developed a fever – yet.

I called David’s plastic surgeon’s office as soon as we got back from Ry’s doctor this morning. According to the receptionist, the surgeon can’t see David until tomorrow morning at the earliest. I don’t believe she truly understands how serious this is, even though I’ve done everything I know to convey this to her. But what else is new? So, if I have to take David to the ER before tomorrow like I had to take Dad for basically the same thing — although Dad’s abscess was on his butt cheek and David’s is on his face cheek — then so be it. I mean, what else can we do?

Anyway, hard lump notwithstanding, I tell David that now that he has a somewhat crooked gash running from his cheek to his jawline, he looks like a BAMF! And clearly, he is itching to have his new look posted on my blog for all the world to see! So, this is for you, Love! But the next time you want back on my blog, just say something and I’ll be glad to write about you. You don’t have to go all dramatic face on me! Geez! BTW, for those of you who don’t know what a BAMF is, ask anyone under the age of 30. Or you can just look it up on the internet. I recommend the Urban Dictionary.

I feel like I’m leaving something else important off of my list here,  but — oh well — I suppose that’s enough for this past week heading into today.

So, how’s everyone else’s summer going?