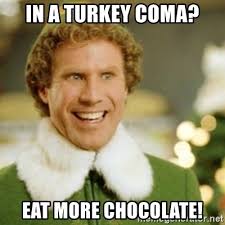 Is everyone doing well and coming out of your turkey comas? Yes? Great! Just think, we’ve made it through Thanksgiving, Black Friday, Small Business Saturday and now it’s Cyber Monday. Whew, I’m exhausted and broke, but this is no time to dilly dally. Apparently, we have fewer days between Thanksgiving and Christmas this year…which means…we are well into the yuletide season! Yes, we can decorate our little hearts out for Christmas and listen to Christmas songs and sing Christmas carols and do other Christmasy things with impunity because ’tis the season.

Or not if you’re not a Christmasy kind of person.

To quote the great Isley Brothers, “It’s your thing, do whatcha wanna do.”

Okay, just to be clear — this is not, I repeat NOT an invitation to a sausage party. OH MY GOD! I was listening to the Isley Brothers’ song on You Tube as I was writing this post and, apparently, “It’s Your Thing” plays during a particular scene of Sausage Party, the movie. At least that’s what commenters for this song were writing. Since I didn’t even know this 2016 movie existed until just now, of course I looked into what they were talking about.

I THINK IT GOES WITHOUT SAYING THAT THESE UPCOMING MOVIE CLIPS ARE NSFW.

The movie trailer was horrifying enough, but the song wasn’t a part of that.

OH MY GOD AND DEAR JESUS!

That’s not what I was expecting to write about today.

THAT’S NOT WHAT I WAS EXPECTING TO SEE OR HEAR TODAY — OR EVER!

Okay, so what was I going to write?

Since most of you are bloggers, maybe something similar has happened to you and if it has, maybe you can give me some idea of how to handle this.

As a blogger and reader of blogs, I periodically search out and read unfamiliar sites. I usually do this during the middle of the night when I can’t sleep and there’s nothing of any particular interest on Coast to Coast AM. Because I’m in bed, I’ll use my phone.

So I’ll start on a blog I’m familiar with and I’ll read the comments on one of their posts and then click on the name of someone whose comment seems interesting; and from there, I’ll read what that commenter’s blog’s about and maybe even read one or two of their posts. Maybe I’ll even leave a comment. Then I’ll read comments from that blog post and find a new site from someone off of that blog who’s unfamiliar but who’s left an intriguing comment and I’ll repeat the whole process. Several times over. Basically, this is six degrees of separation on steroids in the blogosphere.

I can hopscotch through several blogs this way and before long, I have no idea where I am after zipping through six or so blog sites I’ve never been on before. It’s like hopping down bunny trails or going down rabbit holes which lead to other rabbit holes or bunny trails. If you see what I mean. In the end, when I’m ready to go to sleep, I just close out of everything on my phone with one push of a button.

If I’m lucky, I’ll remember where I’ve been the next morning and I’ll bookmark those sites on my PC. That is, unless I’m busy the next day and forget.

I think that’s what happened.

I think I was hopscotching one night (is there a better term for this?) and, apparently, I read someone’s blog and left a comment on their post and then got busy the next day and totally forgot about the night before.

Anyway, someone whose blog I commented on was kind enough to check out my blog and leave nice remarks. She even mentioned that I’d left nice remarks on one of her posts. So that was very cool!

Are you with me so far?

So I promptly clicked on her name at the top of the nice comment she left on my post so it would take me back to her blog. For whatever reason, though, it didn’t link back to her blog. Anyway, she didn’t leave any way for me to get back in touch with her blog because, apparently, why would she need to when I was on it before?

So now I’m highly embarrassed. She probably thinks I’m a blogger who doesn’t reciprocate and that I’m just damned rude. But honest to God, I’ve been searching for her blog for several weeks now and I can’t find it. Also, I replied to her comment on that one post that if she would leave me an address, then I could get back to her blog and that would be great. Only, I don’t think she’s been back to read that post again. Double damn. I’m not even sure if she’s coming back to my blog and reading this.

I’d post her Gravatar pic with the hope that one of you might recognize it and give me the heads up on where to find her blog, but I don’t want to embarrass her or myself any further. Even so, as I check out all of your posts, I’ve been looking for her Gravatar, hoping that she shared a link or posted a comment with one of y’all. Well, hell, I must have gone down a deep rabbit hole because I’m not finding her anywhere. So far.

Has anything like this happened to you? If so, were you able to re-connect to the lost blog site/blogger or did you just have to let it go. Any ideas of what else I can do?

If you wouldn’t mind and just because you might just be the individual in question, would all of you mind leaving your http address if you respond to this post just so anyone who is interested in checking out your blog won’t have any difficulty in finding you; and in case, you’re her? Besides, I love it when people discover each other.

Lastly, I wanted to give a special shout out to my very dear friend, Kim, at I Tripped Over a Stone who’s been on hiatus. Yay, I’m so glad you’re back, Kim! If you haven’t checked out Kim’s site yet, please do because you don’t know what you’re missing! She’s amazing!

Anyway, that’s what I wanted to write today. I hope everyone stays warm and safe and is full of holiday cheer!

YA GOTTA HAVE A LITTLE CHEECH AND CHONG TO GET THIS CHRISTMAS SEASON STARTED THE RIGHT WAY! AM I RIGHT?