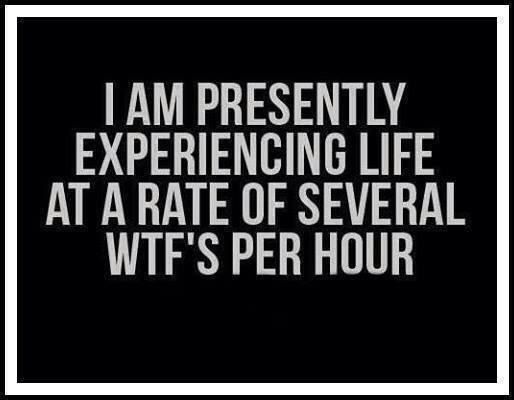 So life has picked back up as swiftly, unpredictably and as Christopher from Freethinker’s Anonymous is wont to say, “nucking futz” as it was when we went into the pandemic. Actually, that’s not true. Life’s worse. Much more hectic. There’s less time to get stuff done. Much more that needs to get done. Too much all at once. It doesn’t stop. Not even at night when I’m supposed to sleep and recoup from the day before. And Christopher, I just want you to know that I’ve now included “nucking futz” into my daily vocabulary, so thank you for that and know that I will always give you credit for that, my friend!

Between appliances (refrigerator, burner on my cooktop, lawn mower–is a lawnmower an appliance? tool? just what category does it belong?) and electronics (including my phone, my computer and David’s computer); and also our landline phones and also our vehicles, and Ryan’s eyeglasses — all of which have gone down, broken or failed and had to get repaired or replaced —

and Discovery+ being… uncooperative… I’m no longer able to watch this service because I get a message that says I need to download their new app from our TV’s app store. So I’ve gone into our TV’s app store and I press the button there to download the new app and then I get a message saying I need to download their new app from the TV’s app store…so I try it again and I get the same message. It’s a never-ending, vicious circle of lies that doesn’t make any sense and so I no longer have the ability to watch what I’m paying for and I can’t even get their stupid app off of my TV and…even my daughter who knows and understands all of this stuff can’t get the damned thing to cooperate…

and I want to become physically violent and put the damned TV through the wall…but I don’t…because I’m still better than that. Check back with me in another week or two. I may have become less better by then and have actually done it!

Then our service provider for cable TV decided they are no longer carrying Music Choice (about 20 or more different music channels offering different genres of music), which we watched/listened to ALL THE TIME!!!!!! and we also used to help Ryan de-escalate whenever he has his frequent/daily meltdowns…so that’s one less tool in our arsenal to help him out… *I’M SCREAMING IN MY HEAD!!!!!!!*  Also, it’s a good thing I’m not sitting in front of our TV right now. Just saying…

DID SOMEONE SAY “HOARDING”?

So besides that, I’ve been working with my Dad trying to make heads or tails out of his hoarded house and instill a little less stuff and a little more cleanliness and organization into his home and life. *smh* Dad, too, is uncooperative; however, if it works out the way I plan, all of this (in detail) is going into the book I’m writing.

BTW, I lost my eyeglasses in Dad’s hoard. It’s been weeks and they still haven’t surfaced. I now have a new pair. That in itself is the most messed up story, though, which I’ve already written about, just not here on this blog. I was going to publish it here, but the story kept getting longer and longer and now it’s a fully-fledged chapter in my book, whenever I get my book fully-fledged out.

So, remember those few weeks when I didn’t post anything at all? Yeah, all of the above was going on.

David’s son came in from Cali and he was coming over with his young sons and I had to stop everything and start cleaning house because I hadn’t cleaned the house for company in close to two years…and it’s not that it’s filthy…but it was worse than I thought. Then I got sick (sinus and ears.) And don’t get me started on the gnats that have invaded our house. I’ve tried everything — bowls of wine, sticky strips, bug spray, flyswatter…exorcism…they’re still here!!!!!

Also, Dad had an accident a few months ago (in April) and I’m running him to doctors and other professionals…you just wouldn’t believe everything that’s going on if I told you; but it’s all going in the book. Fingers crossed.

As I can, I’ve been reading my blogger friends’ posts in the wee hours of the night (when I can’t sleep.) I actually found out last week that I’ve been writing responses to these posts in my head only. The next day or two later, I go back and check on these posts and am surprised to find that I didn’t actually physically write a response when I thought I did. WTF? Because that’s how I’m rolling right now.

So just know, I’m falling asleep actually writing a response to you as I’m reading your post. It may not actually get to you, but I’m doing it and I hope that makes you feel special. I promise I’m not purposely ignoring any of you. So when you wonder why I’ve not written a response to your wonderful, amazing post…know that I have in my head. Spirit willing…flesh not able at present…or something like that. Sorry, y’all! Has this happened to anyone else? Please tell me you’ve done this too!

Plus, I’m still working on my book and this blog. Life has given me too much fodder and I’m not sure whether I’m coming or going at present.

Plus, this past week, we just started meeting face-to-face at my writers group again. It was wonderful seeing people I haven’t seen in over a year and a half. There was a ton of laughter and it was great catching up! It was great listening to their stories as well. One person got published in Chicken Soup for the Soul! Yay, Donna! Way to go, Woman! (I’m not sure Donna actually reads my blog, but just in case…) Anyway, I’ve sorely missed my IRL peeps.

Plus a former writers group member just contacted me (yesterday) and is sending me her newly published book. It’s a children’s book. If it’s wonderful (can’t wait to read it), I’ll give it a review here. Or at least I’ll try. Anyway, she’s got my address now and, hopefully, I’ll get the book in the next week or two. At this point, later is definitely better. I told her I wouldn’t be able to read it until after I finished beta reading for another friend.

TRYING MY HAND OUT AT —

And yes! There is so much going on in my life right now that I decided to beta read for a friend. I’m hoping it will offer me escape!

Also, I’m committed to writing a resume and generic cover letter for someone, which is due tomorrow!

Ryan has started going to his group’s events again.

Then there was Father’s Day and the 4th of July. All stories that I probably won’t get to tell because who has time?!!!

ALSO, I JUST WANT TO SAY HAPPY BIRTHDAY TO DREW, DAD AND CHERYL (who sometimes reads my blog)

Also, don’t get me started on doctors and insurance companies because I have a ton of shit to write about that too. OH MY GOD!!!!!!

Also, my neighbors…which is what I was going to write about last week.

But that’s been pre-empted by something much more pressing, which is also why I didn’t put a post out last week because…you know…

AND NOW FOR SOMETHING REALLY DIFFERENT

So this new situation I’m currently dealing with came spilling out of me on Tom Being Tom’s blog because he’s posting again and he was talking about how hectic his life’s been and I think I cried out for help because I’m drowning and he responded and what I’m dealing with came out. I didn’t mean for it to, but Tom’s blog felt so safe at that moment. I told Tom that I was going to use what I wrote on his blog on my newest post since I’d mainly written my post in his responses.

Here’s what I wrote,

“My 86-year-old father is hell-bent on marrying a woman who is 31 years old (they’ve decided to do this but he won’t tell me when). She has four children under the age of 10. They are from a different country. She wants his property and security and has pretty much made that clear to him. He doesn’t want to be lonely and he doesn’t want to end up in an old folks home. This is why he is marrying her. As if she’s going to be there for him, take care of him and won’t put him in an old folks home herself.

As if she won’t kick my brother out when she gets the chance. BTW, Dad doesn’t believe in pre-nups. This is property that was supposed to be a place for my mentally ill brother to live for the rest of his life.

The woman’s mother tried to get her hooks into my Dad. She was too old for him. The cute 31 year old has decided to do this since her Mom wasn’t able to. Dad’s “in love” and believes that she will take care of him and my brother. He says that there’s nothing I can do, he’s going to do what he wants. He’s a hoarder and I’m trying to help him clean his home. Is she helping? As effing if. Effing predators! This won’t be a marriage, it will be a business transaction. Dad doesn’t care. Ugh! He just cussed me out for not being supportive of his plans. And that’s not even half of what’s going on in my life right now! Sorry, but thanks for listening. Mona

20 thoughts on “Of Chaos, Madness, Predators and Prey aka Another Day In the Life”