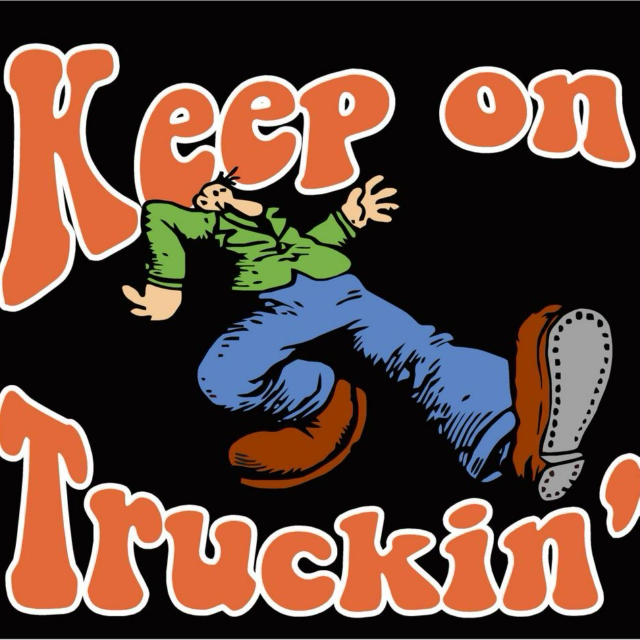 Ry and I had lunch at Norma’s the other day. When we first sat down, the background music was, “You’re no good, you’re no good, you’re no good, baby you’re no good!” I asked Ry if he knew who was singing and he said he did. He had that song and another one by Linda Ronstadt on his IPod, I think he said, “Tracks of My Tears.” Then we got into a little bit of a discussion about how she used to sing for the Stone Ponys. I couldn’t quite remember the name of that song of theirs that I liked so much, it was a one-hit wonder and I started word singing (since I can’t sing to save my life), “You and I travel to the beat of a different drum, oh can’t you tell by the way I run, every time you make eyes at me.”

The next song that came on was “Keep on Truckin’.” Now that’s a song I hadn’t heard in decades. I told Ry that in the 70’s, that was an expression people used to say. It wasn’t trucking, it was ‘truckin.'” You had to say it just right. I don’t think anyone really says that anymore, it’s pretty much fallen out of favor. People will still say “cool” today but “groovy” isn’t used so much anymore, either. I still say it once in awhile just because I think it’s a fun word to say. People don’t say, “man” very much either. That was really big in the late 60’s and early 70’s. If you said “cool” back then, you had to attach “man” to that as well, so it was “Coool, man!” Today, we’ve kept the cool, just lost the man. I wondered if feminism had anything to do with that. Ryan asked, “So did you say that to people even when they weren’t a man?”

I told him that was a good question and while it didn’t make much sense, “Yes. Yes we did.” I asked Ry if he knew who sang that song, was it Curtis Mayfield, maybe? I couldn’t remember.

He said he didn’t know. That was the first time he’d ever heard that song.

I told him that was no problem, that’s what Google’s for. I whipped out my phone and immediately came up with Eddie Kendricks! Hmm, I guess I never knew who sang it after all. That name didn’t ring a bell with me. The next song was Stevie Wonder’s, “Signed, Sealed, Delivered I’m Yours.“ Ry knew immediately that it was Stevie Wonder. He just wasn’t familiar with that song. I told Ry that all of this music was definitely a blast from my past. This was the music we listened to, that my mother always listened to in the early and mid 1970’s on AM radio. I didn’t listen to FM until late 1970’s.

The next song was, “I’m not talking about mmmldnmdm (I never have been able to figure out the word the singer says there) and I don’t want to change your life, but there’s a warm wind blowing the stars around and I’d really love to see you tonight.” Surely Ryan knew that song!

He’d heard it, he just didn’t know who sang it. Didn’t I know?

As I was typing in the words to the song on my phone, I overheard the two people in the booth behind me wondering the same question. The man told his wife, “I’m pretty sure it’s Ambrosia.”

I glanced back at them and said, “I’m not trying to eavesdrop or anything, but I just heard you wondering the same thing we were. It turns out that it’s England Dan and John Ford Coley.

“Who?” the man asked. I repeated the name of the duo. He said, “Well, I guess that was a one-hit wonder.  I remember the song, I don’t remember those names, though.”

His wife said, “Me neither.”

He continued, “Of course there were a lot of songs like that in the 1970’s, that easy rock sound — Air Supply, 10CC, Ambrosia — they all had that same sound. It was hard to tell who was who.”

They thanked me for the info. I told them that it was no trouble and I turned back around. I overheard him asking his wife what the name of that song by Ambrosia was. She said she didn’t know. She never really paid much attention to the names of songs and who did them. He yelled back at me, “Ma’am, ma’am. Excuse me. Can I ask you one more question?”

I turned around and said, “Of course.”

He said it was bugging him, this song by Ambrosia that he couldn’t recall. It was really popular. I told him the one that I really liked was called “How Much I Feel.”

He said, “Oh, yeah. I liked that one too, but there was another one.”

“Yeah, that’s it! I loved that song! Thanks!” He said that he should have brought his phone in with him so he could do what I was doing. Then he started humming a little Ambrosia.

I turned back around and rejoined Ryan who was almost finished eating by this time. A Todd Rundgren song, “Hello It’s Me” came on next. That got Ryan to talking about the different groups he’d been in — Nazz, Utopia. We were now listening to music that was back in Ryan’s wheelhouse. Of course, throughout the time we were there, we weren’t just listening to music. We came to eat, which Ryan had been doing. I tried to catch up with him while he talked about Todd Rundgren.

I could hear the people behind me talking about all of the great soft rock that came out of the 70’s. Like me, they remembered the songs, but continued to struggle with the name of the bands. Or vice versa. The man started talking about 10CC again. He couldn’t remember the name of that song they did. He remembered how much he liked them back in the day, though, one of his favorite bands.

I thought for a moment about playing a little “The Things We Do for Love” or “I’m Not In Love”  on my phone for the two behind me, but I didn’t want to keep interrupting their meal. I can get a little exuberant about these things and it isn’t always well-received when I impose myself. They seemed like really nice people, though. Ryan’s and my kind of people. I thought better and put my phone away. It really wasn’t the time or place to play music on my phone, especially for strangers. They wouldn’t be able to hear it very well in the restaurant with the overhead music blaring anyway. As it was, Seals & Crofts’ “Summer Breeze” was playing. By this time, Ryan and I were wrapping things up and were about to leave.

As Ry and I stood to go, the guy asked Ryan and me whether or not we liked vintage cars. He pointed out the window and said that one was his. I stared at the royal blue El Camino and said, “Oh, wow! Look at that Ry!” I asked the man if he’d restored it himself. He said it really wasn’t his. It was his wife’s. Her dad had just passed and he left her that car and the ’57 Chevy to her brother. They had just come back from picking it up in Corpus Christi.  I offered my condolences to his wife. I said that I was glad she got the car, that I was sure that her dad left a big part of himself in it. She agreed.

I told them that it really was nice meeting them — that I’d almost played a 10CC song for them but I didn’t want to make them feel weird that I just joined in on their conversation. Even though I was leaving, they might check out Youtube. It was priceless when it came to hearing old music and finding out who did a certain song. They said they were like that, too! They liked meeting and talking to folks. Matter of fact, they wondered if we couldn’t stick around for awhile longer. I told them we would, but it was getting late in the day and Ry and I — we had to keep on truckin.’

Okay, Wayward Friends, what are your favorite easy listening songs from the 70’s? Please share in the comment section below!

2 thoughts on “Keep on Truckin’”