After spending about five days in the hospital, our Growlie Boy is coming home today! We’re going to have to change his food to something that will be kidney-friendly, but for the time being, that’s all the vet is recommending. The vet (Dr. Whetstone) is quite pleased with how much Growleth’s numbers/values have come down regarding his kidneys. I don’t know what any of that means other than it’s really great news. When we brought him in, he was one sick cat. His numbers were so high they were literally off the charts, so they couldn’t get an accurate read. To hear that they’ve come down dramatically is wonderful!

On Saturday, Growleth greeted David and me with a hiss when we stopped by to see him — I think this was before he realized who we were. I would blame this on Kelly — but — it was probably just due to over-stimulation from sounds and smells coming from everywhere. I’d be hissing too if I were him! Anyway, it’s good to know that he’s got his cattitude back! Of course, once he realized who we were, he was all purrs and kneading dough and loving up against us — his usual sweet self.

The vet techs and Dr. Whetstone have been amazing in taking great care of him! We so appreciate all that they’ve done!

Growls has been dubbed a piggy because he’s been eating so much at the hospital. 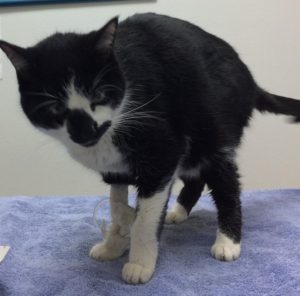 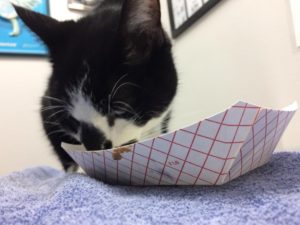 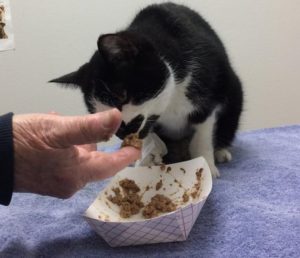 As you can see, he appreciates being fed by hand!

Growleth has David right where he wants him!

Anyway, our boy is still gaunt and, clearly, he hasn’t been taking care of his grooming — his coat looks a little ragged — but we’ve been told to just give it some time! I know Merlin, our Russian Blue, who is quite fastidious, would be more than happy to help out with extra grooming if Growleth will allow it.

Yeah, nice thought, but probably not going to happen.

Anyway, I understand that Growleth is getting a little restless and vocal and is ready to come home. So I’ve gotta run!

Again, thank you, Wayward Friends, for all of the prayers and good wishes! It truly does mean a lot to me and my family!

1 thought on “Growleth is Coming Home!”