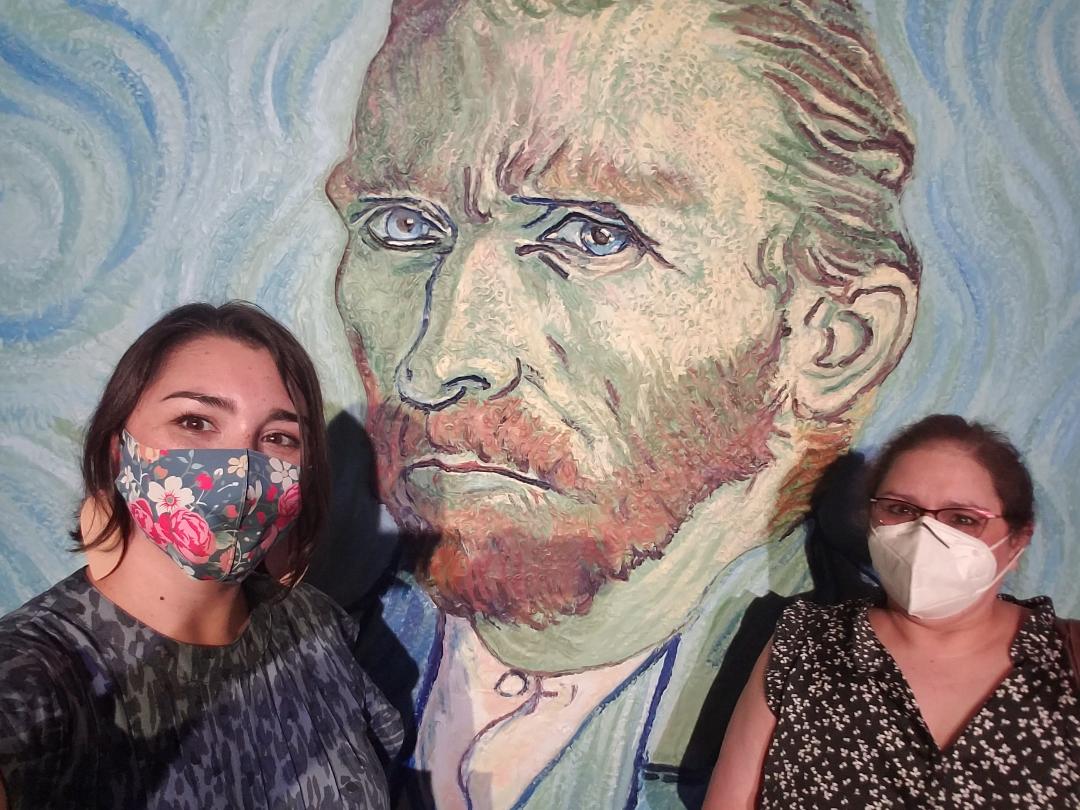 Last Friday, Lauren and I went to the Van Gogh exhibit in Dallas. The immersive Van Gogh exhibit. Okay, first of all, I thought it was at the DMA. *loud obnoxious buzzer sound* Boy was I wrong about that!

This will probably be the only time you’ll hear me say this but, it’s a good thing my daughter was driving because I damned near got us lost. And that’s saying something because Lauren is as directionally-challenged as you can get. Of course, I thought we were going to the Dallas Museum of Art and not Lighthouse Dallas, which shouldn’t be confused with The Lighthouse Church in the D/FW area. I’ve heard of the church, but I didn’t even know we had a museum in Dallas named The Lighthouse. So yea, it’s also good that Lauren knows how to use her GPS on her phone.

What the Heck Is It?

Wait…do they consider The Lighthouse an actual museum or more of a theatre? A hybrid? Something completely different? It’s kind of confusing because it’s not like it was set up with original works of art to ponder. It was an immersive experience of animated Van Gogh works of art projected around the four walls of the room, fading in and out of other Van Gogh works with synchronized music playing in the background. Is it wrong of me to have wanted to hear the song “Starry, Starry Night” by Don McLean when Van Gogh’s The Starry Night enveloped us? I don’t care if it was, that’s what I wanted. But then again, I probably would have ended up in tears…and I was wearing mascara…so never mind what I wanted and, thank you, whoever thought of this in advance when choosing music.

Also, never fear, that’s what YouTube is for, my Wayward Friends, with which I’ve provided you at the end.

Most of us sat on the floor in the middle of the room wearing our Covid Masks, of course; just taking it all in. Once you were in the exhibit proper, you could stay as long as you liked. You could watch the entire 30 minute film as many times as you liked in any one of the three rooms they showed this film. We stayed through part of a second viewing in a different room, but we didn’t get a very good seat in there. Frankly, I’d had all of the sitting on the floor my body could handle.

It’s also a good thing I’ve been stretching and I’ve lost a few pounds and I wasn’t wearing a dress; otherwise, this could easily have turned out to be a humiliating experience. As it was, one poor man needed extra help in getting off the floor because he sure wasn’t able to do it by himself! Hey, I’ve been there and that is no fun.

I will say this, though — if I had to get lost somewhere, this is where I’d want to get lost.

Is it wrong of me to want to have a room in my own house where I could project this exhibit throughout to experience over and over again? Note to self, when I win the Big Time Lottery, check into this! Of course I’d outfit the room with a very comfortable bean bag or two. It’d be nice to sometimes have a laser light show to alternate with the Van Gogh projection.

Has anyone else seen a laser light show set to rock music? As a teen, we used to go to the State Fair of Texas and do the laser light show, which was set up in a tent in the Midway where all of the rides were. We’d lie back on bean bags and listen to three songs from Bad Company, Boston and maybe Foreigner…I think they had three different shows with different music selections in each one…but all of the songs were classic rock synched up with the light show, which was pretty amazing. Might some of us in that tent been slightly altered when we watched? Yeah, that’s a good chance.

All I know is if they ever bring back the Pink Floyd Laser Light Show, I definitely want to experience that as well. I never got to see it back in the day. Holy Pink Floyd, y’all! It’s coming in October. This October! Okay, I have to wrap this post up soon because I have plans to make, peeps! There’s so many things I’ve missed through the years. I never got to see Stone Temple Pilots either! Or Led Zeppelin! *sigh* And don’t you know that when you exit an event like the Pink Floyd Laser Light Show, everyone’s eyes are going to be red and the distinct smell of gonja will perfume the air! If I ever go, I have this friend who I’m definitely taking with me! Yep, I definitely have a few phone calls to make!

Okay, back to the Van Gogh exhibit — We also walked through their gift shop filled with Van Gogh everything. Need a Starry Night yoga mat? They had it. Need a mask? For twenty dollars and some change, you had your choice between four of Van Gogh’s works. Keychain? Yep. Coffee mug? Absolutely. Hey, you could get coasters to go with your coffee mug. And who doesn’t need and want a Van Gogh lanyard? My daughter surprised me with a book about our Van Gogh experience! She’d prepaid for it when she got the tickets, and we went to pick it up right before we left. She shouldn’t have, but I’m so glad she did. Thank you, my Love!

Lauren and I don’t get the opportunity to hang out very often, but it was the perfect afternoon with the perfect person. We had a delicious lunch on our way to the exhibit, we caught up on each others’ lives and then we enjoyed the exhibit.

The Fashion Police and

As we left the museum, a couple of guys/staff asked my daughter about her outfit. They were admiring her style. She was dressed adorably in a dress with what we used to call fanny packs…this was like an upscale fanny pack that she wore around her waist. I thought the guys were hitting on her. Lauren assured me that she experienced something much better than getting hit on. These guys were what amounted to the fashion police in Dallas…and they had nothing but fabulous compliments for her. Snaps, Baby!

Lastly, as we left, a couple of other staff members outside told us that the exhibit goes through December if we wanted to come back. One of these two ladies also added that they’re presently updating the venue and it will soon house a restaurant and bar.

Lauren commented that she loved how surreal the exhibit was and wondered if they’re going to exhibit other artists. The other staff woman said that was the plan, though they weren’t privy to who the next artist would be. We all thought that Dali would be freaking amazing…that you wouldn’t even need to take anything to alter your state…if you’re into that sort of thing…all you needed to do is show up. But even at this event, Lauren was sure she saw a few people with altered states of mind.

I said dropping acid while experiencing something like that…wow! I could definitely see people doing that. One of the staff started laughing and said that she knew a couple who had…then she quickly added, “not that I really know them or anything.” The expression on her face when she realized what she’d just said to me, a patron and a stranger…I guess she realized just how much trouble she could get in if I reported her. “It’s perfectly fine if you did know them though,” I said, trying to put her mind at ease. “I could definitely see how one might want to do something to enhance one’s state to enjoy the show even that much more.” She laughed and we all said goodbye.

It was time for Lauren and me to go before we hit afternoon traffic on a Friday…in downtown Dallas.

There’s so many things to be grateful (why isn’t it written “greatful”?) for in this life…hanging with my daughter on a gorgeous early September day is definitely one of the best and I thank God Almighty for the opportunity! Well, Lauren, too! And the Van Gogh exhibit? I hope you find someone who enjoys art and/or greatness…and y’all get a chance to experience this for yourselves when it comes to your neck of the woods!

Also, I used to watch Dr. Who back in the day, but it’s been years! When we got to the house, Lauren had one more thing she wanted me to experience. Well, here it is, see for yourself. If you don’t cry, check your pulse because you’re probably dead. Sorry in advance to anyone who’s wearing mascara!

The next cultural event Lauren and I are taking in is Hamilton. That’s in October. Oooh, maybe we’ll get to do two cultural events!

I hope y’all had a wonderful weekend and have an awesome week ahead!

PS: Of course we just marked the 20th anniversary of 9/11 this past Saturday. I spent most of the day watching The History Channel, just like I do every 9/11. I won’t forget and I cry every time. You’d think I’d be over it by now, but it’s raw and brutal every time I see what our country endured on that day! I wrote about this in 2012 and if you’d like, you can go back and read what I had to say about it here. I’ve been thinking about what’s transpired in my life, in our lives since 9/11. I’d like to say there’s so much good that’s happened since, but I dunno. What do y’all think?

Boo, from Welcome to My Little Corner of the Institution, suggested that I watch the following. I’ve never seen this video before today, and I warn you, it’s graphic and disturbing…and as Boo herself describes it, “heart wrenching.” It’s about the iconic picture that captures a man falling to his death on 9/11. If you are sensitive, please consider not watching this. For those who can watch this, it’s a reminder of lives lost, of people having to make the best decision out of the two worst decisions possible on this day, of terror that gripped this country and then united us in our resolve to never let this happen again. It’s almost unbearable to even think about! Yet, it’s important that we not forget less we doom ourselves to have history repeat itself.

20 thoughts on “Getting Lost in Van Gogh”