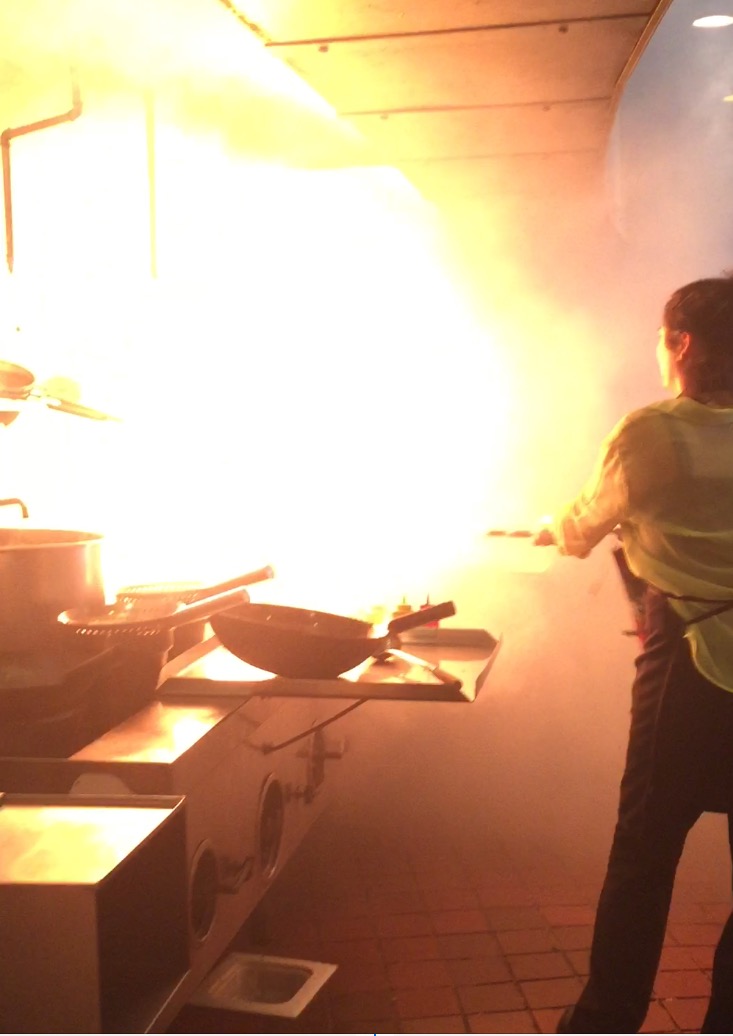 Now I’m not saying that what happened at the restaurant several weeks ago had anything to do with her looking for another job, but starting tomorrow, my daughter Lauren will have gone from this job

I like to think of “the kitchen fire” as the beginning of the end of a seven-year run at her restaurant job, though.

According to my daughter,  fires like this tend to happen more frequently than people are generally aware; although, this was Lauren’s first time to start and put a fire out … at her job! Luckily, this happened before the doors opened to the public and the fire department didn’t have to be called.

Anyway, the fire was a couple of weeks ago and now she’s putting in her final shift today (Sunday.) It’s been a sad week for her. This place where she’s given the last seven years of her life had become somewhat of a second home to her. She’s going to miss many of the people she’s worked with. Even so, I think she’s so over the thankless job of managing a restaurant with the long, arduous hours it demanded from her.

Twelve hours on her feet, five days a week, sometimes closing and leaving at 11:30 p.m. before having to turn around and be back at work the next day at 8:00 a.m., was typical and expected. She looks young because she is young, but that kind of hard work and the back-breaking hours required puts a lot of wear and tear on a body. It would appear that the “Ebenezer Scrooge” part of her (her body) has finally won. Lauren’s figured out that regardless of what her head might suggest, she’s not Peter Pan after all − barely in time. She’s starting her new job tomorrow.

Lauren actually learned about the new job opportunity a full week before the fire. A good friend was leaving her position at this company to return to school and thought Lauren would fit in well as her replacement. Lauren had been taking her time weighing the pros and cons of making such a radical career change when the general manager (GM) at the restaurant told Lauren that she would be going to a new restaurant location in the coming weeks − wasn’t sure where − just somewhere in the wide vicinity of the DFW area. That news coupled with the fire and the myriad other ridiculous things Lauren’s suffered through at this restaurant over many years sealed the deal in Lauren’s mind about what she needed to do.

Lauren put in her two weeks’ notice prior to actually interviewing for the new job. As she put it, by turning in her two weeks, it forced her to get the new job. She gave herself no other alternative. The new position would be in a completely different industry than she’d ever worked and it would involve working — not crazy hours and within a respectable driving distance. The pay at the new job would be a lateral move, but her work schedule would be fixed and it would allow her to have weekends, evenings and major holidays free. Yep, an office position! How crazy is that!

Brat that she is, shortly after Lauren interviewed and secured the office job, she was also invited to interview at two other places; one for a different restaurant’s corporate offices and also for Lancôme Paris, the international cosmetics company!

A representative of Lancôme happened to be at Ulta at the same time Lauren was and overheard Lauren talking to a friend about how to correctly apply the makeup they were looking at! The rep told Lauren that she has the look, the skills, and the expertise Lancôme was looking for. That job would have sent her traveling, but Lauren had already committed to the new office job and politely declined. Still, it must be nice to be in such high demand in so many different fields: cosmetics, restaurant and business!

Since the fire happened before Lauren interviewed for the office position, she thought that showing the tape of her putting out the fire might be impressive at her interview. David and I advised that she just suggest that she’s good at “putting out fires.” We felt that letting her potential employers think of this in metaphorical terms rather than literal ones was for the best − she didn’t need to scare them away!

I’m just hoping Lauren will be able to adjust to, presumably, a much slower pace because my guess is that the new job won’t have the same kind of drama as her last. However, if the office job doesn’t work out, Lauren might consider becoming a firefighter. Then, by all means, she should show the video at interviews — as long as she leaves out the part about how she started the fire.

Ah, it’s 6:30 exactly and Lauren’s called and said she’s on her way home. She said I should be ready with my camera when she gets here but won’t tell me why. Uh, oh.

*So I’m having technical difficulties with this video. One of Lauren’s co-workers taped it and sent it to her and then Lauren sent it to me. I’ve tried everything, but I don’t think my computer is equipped with the right software to rotate it around. This is how it came to me and I have no control over it. Sorry about that! I’m still providing it even though you might have to tilt your head in order to watch it. Lauren putting out fire video.