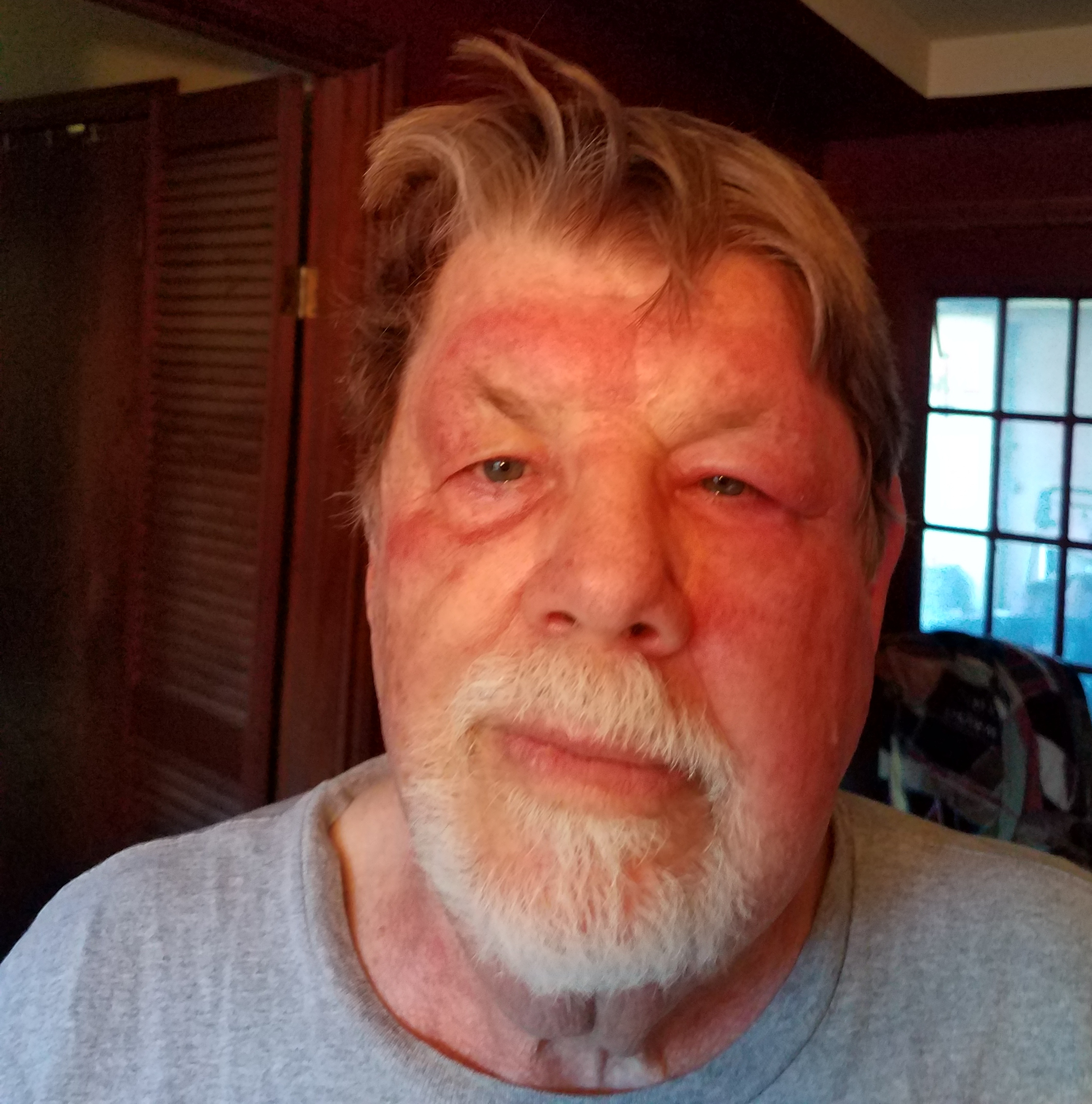 It was approximately 2 1/2 months ago when I wrote on my blog,

I tell David that now that he has a somewhat crooked gash running from his cheek to his jawline, he looks like a BAMF! And clearly, he is itching to have his new look posted on my blog for all the world to see! So, this is for you, Love! But the next time you want back on my blog, just say something and I’ll be glad to write about you. You don’t have to go all dramatic face on me! Geez!

And yet, here we are again. The assumption is that David’s missed being on my blog — just in time for Halloween, too. Bless his heart!

BTW, David’s gash has healed up nicely — matter of fact, you don’t really notice it unless you’re looking for it. And that is great news because his  gash was sooo late summer but now we’re into fall fashion. So instead of a gash, in his 2.0 version of Dramatic Face, 2017, David’s sporting a rash. Talk about “itching to have his new look posted!”

The dermatologist took one look at David, shook her head and with hands on hip, demanded, “What have you gotten yourself into this time?!” She put him on a two-week course of treatment: prednisone and mupirocine ointment to treat the poison ivy rash — all over his face. However, even with that and taking benedryl, David still feels like scratching his face off. I told him that he’d entered what I believe is one of Dante’s levels of hell — that maddening itch that will not be relieved. Shudder!

That’s when I turned to Google looking for an old-fashioned poultice to, hopefully, alleviate some of his misery. My lifelong experience has been that everything I need and use comes in jars, tubes or plastic with a brand name attached, so I was leery of what exotic ingredients might be required for the esoteric art of making a poultice. Since it was after midnight when David just couldn’t stand the itch anymore and I didn’t have apple cider vinegar or eye of newt on hand, I ended up mixing together a little baking soda and water. Because if we (and when I say we, I really mean I) didn’t do something, none of us were going to get any sleep and someone may have ended up in jail (and when I say someone, I really mean me, because I was ready to kill him!)

Suffice it to say that David isn’t much fun in this condition. And he’s loud in voicing his displeasure — as I’m sure I would be if I were going through this. (BTW, this is me trying to be understanding.) As it is, I think I’m already doing enough to be supportive by exhibiting sympathy pains or possibly the heebie jeebies. At least that’s what I’ve been telling myself because I, too, seem to have a slight itching on my face and hands and because — I don’t think I could bear the alternative explanation.

Note to self: add apple cider vinegar and more baking soda to my grocery list — just in case. Eye of newt, too, if I can find it — because you just never know when it might come in handy!

Did I mention that his rash is contagious? And that David and I share the same bed?

I suppose he’s lucky that it’s not anywhere else on his body because I can think of a few worse places he could have it. Still, where in the hell did he come into contact with poison ivy? It’s not like he went hiking in the woods or off on some other adventure in the wild. And how could it be on his face but not on his arms, legs or hands?!

David remembered that he and his friend Clarence went looking for a golf ball that hooked or sliced or did whatever it did and landed in the weeds last Thursday. Understandably, we assumed that’s where he came into contact with this ninja plant assassin. David called his friend hoping that he, too, might be going through the same misery — because that’s what a real friend would do in this situation! Alas, David’s friend hasn’t been exhibiting any symptoms, so the golf course was ruled out as the probable source. Also, some friend Clarence turned out to be!

Last night, however, we found out that the guy who’s been doing some work in our backyard is now complaining of “itching.” Aha! and also — oh shit.

As much as I’d like to blame Kelly for this, I can’t.

It would appear that even though we live in the middle of suburbia, Mother Nature has somehow managed to cultivate a crop of poison ivy in some out-of-the-way corner of our backyard paradise. Without our permission, too! That bitch! Plus, isn’t that illegal? Wait — no — I believe that’s a different kind of crop. Nevermind.

No one’s exactly sure what the irritating ivy looks like or exactly where it’s located or even whether it’s still there because, presumably, there was some cleaning, clearing out and pulling up of overgrown plant material. Also, David did a “weed and feed” on Friday — so hopefully, that eradicated whatever didn’t already get yanked out.

David remembers pulling a few climbing plants off the fence last Friday. He was wearing gloves, thank goodness! My guess is that his gloves probably touched the poisonous plant and then he touched his face, wiped away sweat — whatever — without even realizing it.

Yep, I think that answers the aforementioned questions.

I just hope this unwanted intruder has now been obliterated and Mother Nature will think twice before seeding our yard without our permission. Still, one can never be too sure about these things, which is why I don’t need to be outside weeding the flower beds.

Nope, I’m content with taking pictures and posting them on my blog. Oh, and administering poultice when need be while supplying plenty of sympathy.

By the way, David would prefer that I stop sending pictures of him out to family. I’m not sure why because I think his pics bring great awareness to important issues like skin cancer and poisonous plants. Apparently, though, he isn’t interested in his face being used for the greater good as a public service announcement. I told him that’s fine as long as he quits giving me dramatic face pictures to send. But hey, the season’s still young and you never know — he may end up changing his mind as surely as he is to change his look. Personally, I can’t wait to see his winter face.

Anyway, for now, I’m honoring his request by not emailing anymore pictures — however — I never made any promises about my blog.