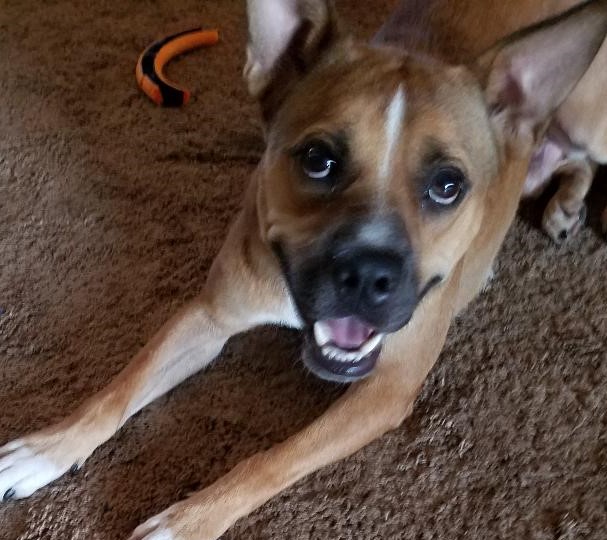 When Lilibeth and I got together earlier this week — well, first of all, she had her birthday over a week ago and I completely missed it because damn, Facebook is supposed to keep me informed of these things and somehow it didn’t — oh, yeah, probably because I rarely check out Facebook. Never mind. Anyway, I was horrified that I missed her birthday because she is such a good friend, which makes me an awful friend at this moment. She didn’t forget my birthday. Please forgive me, Lilibeth! Anyway, we got together for lunch, finally; though, I so want to take her someplace really nice to celebrate her birthday, not that where we ate wasn’t nice. I just want to upscale it a little. In my defense for forgetting Lilibeth’s birthday, my life has been crazy busy in the craziest of ways. Days pass by without my being aware of how quickly the time flies. Well, I know that it is flying, but still, it’s going by much faster than it usually does. Also, please note my use of the word “crazy” in this paragraph. This is not for naught.

Lilibeth told me she’s been cleaning and organizing. Is it wrong of me to be jealous? I look around my office space and the rest of the house and realize, no, it is perfectly reasonable for me to be jealous that she’s been giving everything in her home a really good clean and shine because mine is so in need of one and I haven’t the foggiest when I’ll be able to do that again. If ever. So then Lilibeth asked me what I’ve been up to.

I prefaced what I was about to say to her by stating, “I just want you to know, that, yes, I do have the word ‘STUPID’ tattooed across my forehead. Then I explained that we have Buddy staying with us at present. 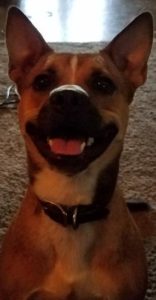 Buddy is my Dad’s dog. Or was my Dad’s dog. To be exact, since Mom died, Buddy was Dad’s second dog. His first dog Max has now found a loving home and he has other dog siblings with which to spend time. So after Max didn’t work out for Dad and even though we told Dad not to get another dog (Max is a whole different story, here), he did exactly the opposite of what we said — because no one’s going to tell Dad what he can and can’t do! — and he went and rescued Buddy from a dog shelter — for free — because he’s a senior citizen. Dad’s in his 80’s.

It would have been one thing if Dad had gotten a dog that was older, smaller and more sedate. However, Dad wasn’t looking for a dog that just lies there. He wanted a more energetic dog to keep him company. So Buddy was about nine months old when he got him and he was and still is very much a puppy — a high-octane, lovable, undisciplined puppy who likes to jump on you because he gets so excited that you’ve come to visit him! He’s medium-sized and strong and has so much energy that I get exhausted just watching him. He loves to play fetch and tug-of-war! He’s full of personality and can be really quite hilarious! He’s also smart and is proving to learn quickly! We are teaching him to sit and stay! He just needs more practice. My 80-plus-year-old dad had no business getting a dog like Buddy because he can’t keep up with him and Buddy is too strong and too big for him to handle. Period. The people at that shelter should be horse-whipped for letting Buddy go with Dad! The nice thing is that Dad has a large back yard, which I guess was supposed to be a good thing.

What’s not so nice is that Buddy discovered the joys of getting out of Dad’s fenced-in yard and chasing the neighbor’s cat, much to the ire of the neighbor. Unfortunately, Buddy was caught chasing this cat by Dad’s neighbor ergo the neighbor has now got it out for Buddy.

Anyway, not knowing anything about Buddy and the neighbor’s cat until I encountered this irate neighbor when I went to pick my Dad up to take him out for his birthday this past Sunday, the neighbor told me in no uncertain terms that the next time Buddy gets out, he planned on killing him either by shooting him or by poisoning him for chasing his cat.

Okay, this isn’t the first encounter I’ve had with Dad’s neighbor and — well — I’m convinced that the neighbor has some serious mental health issues. He’s an intense kind of guy that never smiles and he kind of gives me the creeps. Bad vibes emanate from this guy all away around. He’s a loner and, you know, there are some people you just know to stay away from or else.

After talking to Dad about what his neighbor told me, Dad tried to dismiss this as no big deal. Yeah, Dad said he knew about the neighbor’s cat. As Dad pointed out, Buddy’s never hurt Socks, who was my Mom’s cat and is now my Dad’s cat. Dad thinks the neighbor is all talk and that he wouldn’t really hurt Buddy. He just thinks the neighbor is overreacting. However, as I pointed out to Dad — if he’s wrong, then he’ll be dead wrong about Buddy, and Buddy doesn’t deserve to be in that situation. So now Buddy is temporarily staying with me until I find him a good home.

It hurt my dad so much for me to take Buddy away. AND ON HIS BIRTHDAY of all days! That makes me the world’s worst daughter! I could see the pain in Daddy’s eyes. However, he knows that this is the right thing to do for Buddy’s sake. Damn I hate being an adult sometimes!

So as of this writing, Buddy is temporarily hanging with me, David and Ryan. At least he is safe, even if our cats are temporarily terrified. I’m hoping I can find a kind, responsible dog lover who is deserving of Buddy. And as much as I’d like to keep Buddy, that just isn’t going to happen because we have three cats, who are not dog people (because cats are people, too, you know.)

Birdie, Growleth and Merlin think I’ve lost my ever-loving mind and they feel BETRAYED! We’ve had to do some fancy maneuvering to keep Buddy away from them. Don’t even ask how— but all humanely! Even so, at one point (like on Day 2), I suppose I wasn’t watching as closely as I needed to be — amazing how distracting work can be from taking care of pets — when I heard a commotion and then I saw a blur and I realized that Buddy had chased one of the cats out through the cat flap. Of course, I immediately went to find out whether he’d chased Birdie or Growleth. Much to my surprise, it turned out to be Merlin. Merlin is our very old kitty boy and he is fat. I’ve never seen Merlin run so fast, never knew he could run as fast as he did a couple of days ago. And let me tell you, Merlin was very vocal in his displeasure about my bringing Buddy into our lives. I am such a bad cat mom/grandma right now!

Anyway, yeah, I brought a dog into our home who, apparently, enjoys chasing cats — the home I share with three dog-hating cats — and I knew all of this beforehand.

Lilibeth just looked at me and said, “ARE YOU JUST NUTS?!!!”

I replied, “You know, I believe we’ve already established that I have STUPID tattooed across my forehead. What more do you want? How about a lovable dog?”

Unfortunately, Lilibeth was not in need of a dog at the moment, especially one as active as Buddy. That’s too bad because I could have taken care of an amazing birthday gift for Lilibeth and a great home for Buddy all in one fell swoop.

If any of my readers know of a place that I can establish beyond a reasonable doubt that this is a very good and loving home for Buddy, please contact me at waywardsparkles@yahoo.com. Buddy deserves love, security, proper discipline and lots of attention and affection from goodhearted people who will provide him with nothing but a great life! It would be even better if this home had another dog/s, perhaps a little older than Buddy, who could help keep him in line and would also provide him with the pack he needs. He’s a great dog, adorable and a lot of fun! I’m pretty fond of him, myself, but unfortunately, I’ve been outvoted.

Also, I have about a week to find Buddy a good home before I leave to go to Chicago for Drew & Danielle’s wedding. David’s made it clear in no uncertain terms that I will have found a home for Buddy by then or Buddy will not be here when I return. I’m afraid David will have animal control take Buddy away and Buddy just doesn’t deserve that! Normally, David is a reasonable man. However, it’s taken him over ten years to become a cat person and now that he’s become one, he’s sided with our cats. And our cats do deserve to not live in fear. So I agree that Buddy does need a home with NO CATS! Alas, that is not our home.

I do hope I hear from a few or many of my readers who may be able to help us out with our dilemma. I don’t know what kind of dog Buddy is, probably mostly mutt. I’m not much of a photographer either, but here are some of the pictures I took of him! Please help me find Buddy a great home! 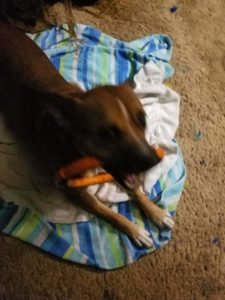 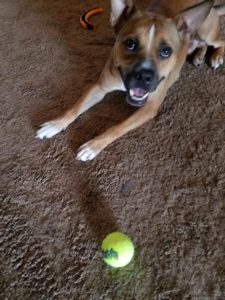 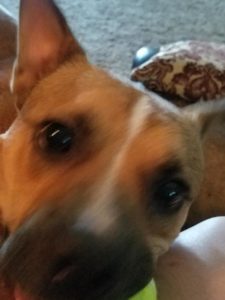 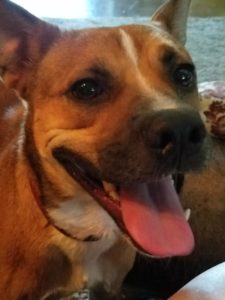 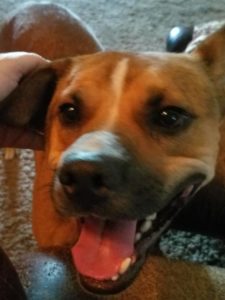 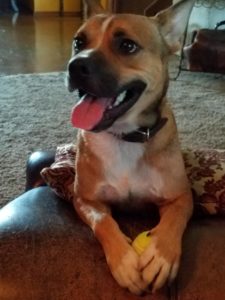 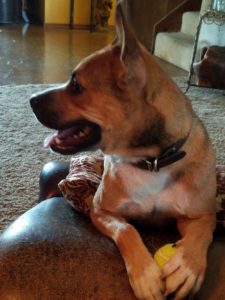 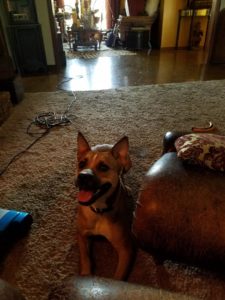 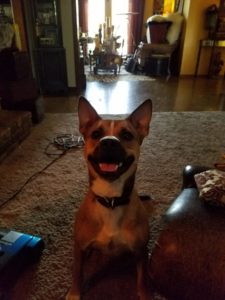