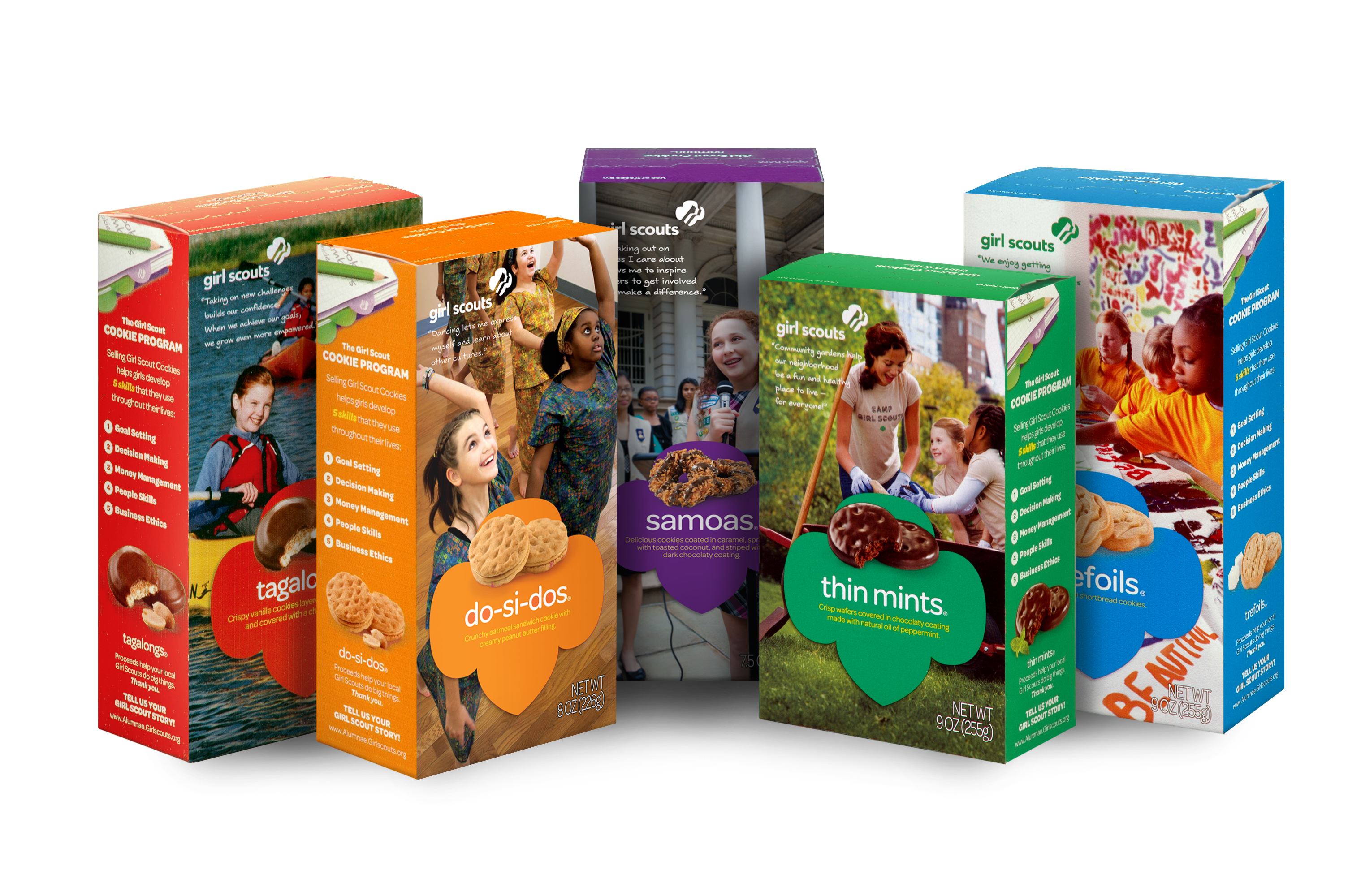 Each January, I look forward to two things: 1) re-committing to my never-ending New Year’s resolution of finally dropping those unwanted pounds; and 2) breaking that resolution with the ring of our doorbell.

Throughout most of the year, I don’t even answer the door except when I’m expecting company. In January, though, that rule goes out the window. When I hear the doorbell ring, I expect to find one or more ten-ish-year-old girls decked out in their uniforms with a harried parent hanging a few feet back (usually a mom) often with younger siblings in tow, hawking their products – Thin Mints, Do Si Dos, Samoas, Trefoils, Tagalongs, Savannah Smiles, Girl Scout S’mores and, this year, Toffee Tastics – that’s right – GIRL SCOUT COOKIES! 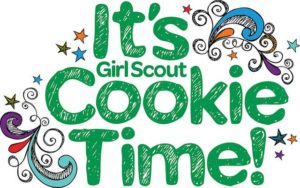 Since I can remember, I’ve looked forward to fresh-faced Scouts stopping by and taking our cookie order – the goods usually delivered the week before Valentine’s Day. Every Girl Scout in my neighborhood knows that I’m an easy sell because as long as I have money in my account, I will buy cookies from them! In the last few years, though, the system’s changed along with the prices. Instead of coming equipped with an order form and pen – these days, the girls roll out big boxes of cookies on wagons as they go door-to-door!

For me, the consumer, this is a good news/bad news situation. First of all, I liked ordering cookies. When I ordered, I could get as much as I wanted of whatever kind of cookie I wanted – all delivered to my doorstep. This is an annual event, so it’s important to buy enough cookies to last awhile. Now, however, I face a moral dilemma. I worry that I’m not going to be a good neighbor if I buy up all the cookies on their wagon. I mean what if my neighbor, two doors down, really loves Savannah Smiles and I’m about to buy the last box? Maybe I shouldn’t take it. Heaven help her, but what if my neighbor needs that box of cookies more than I do? But then again, maybe because I’ve taken that last box, I’m actually helping her stick to her weight-loss resolutions. If ever there was a WWJD moment, this is it. So what exactly would Jesus do in this situation? Would he selflessly pass up the box of Savannah Smiles or would he secretly and guiltily relish the fact that he just took the last box?

The answer is neither. I’ll tell you what Jesus would do – just like he stretched five loaves of bread and two fish and fed over 5,000 people back in biblical times, in this case, he’d also say a prayer and – voila – there would be enough boxes of Savannah Smiles for every person on the block – as if by magic. Yes, that’s right – we’d all be smiling!

But I’m not Jesus, I’m not feeding the multitudes and I certainly don’t have Jesus’s ability to stretch a box of cookies! So screw the neighbors! Back off bitches, that last box of Savannah Smiles is mine!

No offense to my neighbors.

Back in the heyday of ordering cookies, I was known to buy well over $100.00 worth of cookies in one fell swoop. That’s a lot of cookie dough! (Yeah, I just made that pun and I’m not taking it back!) However, it’s a brave new world out there and the Scouts aren’t taking cookie orders for no one, no more. Not no way. Not no how. 🙁

By the way, have you noticed that when a person says “brave new world,” it’s almost always to herald in something new that they don’t necessarily like or want? For instance, you might hear someone saying, “Forget worrying about the illegal immigrants coming to take our jobs. They’re just as screwed as the rest of us. It’s the 21st Century and now, all of us have to worry about technology and AI’s replacing us at work. It’s definitely a brave new world.”

As far as I know, robots aren’t selling cookies door-to-door – yet – but in my case, these changes/this brave new world now limits me to whatever boxes of cookies the Scouts have left when they ring my doorbell. Unfortunately, we are not the first house on the block. Nor the second. Nope, we’re way down the street – so by the time the Scouts get to my home, I’m looking through remnants, boxes of second-rate cookies that others before me didn’t want.

This is the thanks I get for being a loyal cookie customer for over forty years?!!!

I’m relegated to getting whatever my neighbors passed on?!!!! Really?!!! After all these years, is the Girl Scout Organization saying, “Thank you for your unwavering support” or better yet – “You’ve been such a great customer, Mrs. James, that we’ll make an exception in your case and continue taking your order and delivering your cookies to your home?” HA!

Last year, Scouts actually came to my house completely sold out of Thin Mints! Not a good move on their part. And a pox upon whatever neighbor took that last box! As disappointed as I was, I still bought a couple of boxes of whatever the girls had left because it is bad juju not to buy cookies from a Girl Scout. Same goes for not putting coin or paper in the red kettle of the Salvation Army at Christmastime – just saying – ignore Girl Scouts and the Salvation Army at your own risk!

If there is one upside to not ordering cookies, I suppose it would be the instant gratification of getting to eat the cookies right away – unless, of course, one is forced to drive around town looking for Girl Scout cookie stands selling your particular favorite box of cookies. Then that just makes you creepy and probably a hardcore addict. But it is what it is and – judge me all you want – but I do what I have to do. And that’s what I did last year in my quest to hunt down beloved boxes of Thin Mints. Luckily, I found a group of eager Scouts who had set up their cookie stand in front of the grocery store. Score! I bought five boxes of Thin Mints, which went directly into the freezer the moment I got home – a twenty spot well spent!

I don’t remember when I started freezing my Thin Mints, but I’ve been doing this for over twenty years now. Maybe a friend or possibly even a Girl Scout suggested this. I remember initially thinking that it seemed weird to freeze my Thin Mints before I ate them – but hey, that’s not the only surprising thing you’ll find in my freezer. Once I tried frozen Thin Mints,  there was no going back. I was hooked and now this is the only way I’ll eat a sleeve (because who can eat just a couple of cookies at one time?)

Well, there is one more acceptable way to eat Thin Mints. You can crumble them up and mix them into a bowl of mint chocolate chip ice cream. Yum. Okay, hold on, y’all – I just discovered another one more way to really enjoy Thin Mints – but I haven’t tried it yet. Apparently, there are all sorts of adult beverages and shakes using Thin Mints and other Girl Scout cookies. You can get some of the recipes here. The adult shake that I’m most intrigued with is this one, though. This could become my newest addiction.

This year, I’ve kept my billfold close at hand in anticipation of the doorbell ringing. When it finally did, it was just some guy.

Me opening the door, then folding my arms, giving him the stinkeye and more or less accusing him: “Oh. You’re not a Girl Scout.”

Me: “Save it. Listen, the only thing I’m interested in right now is a box of Thin Mints. So unless you have Thin Mints – go away!”

Tree guy looking somewhat alarmed while slowly backing down my walkway: “Sorry to bother you, ma’am. Have a good day!”

Me: “Yeah, whatever. And don’t come back here again unless you have Girl Scout cookies with you!”

Frankly, I’m not sure what’s happened to the Girl Scouts in our neighborhood this year. Maybe they’re no longer selling door-to-door. If that’s true, then it’s a little devastating. Or maybe it has to do with the Boy Scouts now allowing girls to join their club. That’s fine by me, but I figure that if we’re going to change things up in this “brave new world,” then the Boy Scouts should also be allowed to sell Girl Scout cookies. I mean, fair is fair. Besides, in whose universe is it stated that selling cookies is gender specific? At least that’s what I told the young Boy Scout and his dad who sold us popcorn on our doorstep last November. I believe my exact words were, “You know, you’d be getting a lot more money from me if you were selling Girl Scout cookies, don’t you?” Based on the concerned looks and awkward silences from both the kid and his dad, I doubt I’ll be seeing these two next November. Ah, well.

My favorite Girl Scout cookie story, of course, is the one about the enterprising Scout who thought outside of the ordinary cookie box and set up her cookie stand outside a marijuana dispensary. She sold well over a hundred boxes of cookies in just two hours. She is what is known as a “smart cookie.” Some have frowned upon her initiative and marketing genius from a moralistic standpoint, but I think that as long as this girl doesn’t start “sampling the product,” she’s got a bright, successful future ahead of her.

Since then, other Girl Scouts have followed her lead and are now selling outside of pot dispensaries. After all, it’s always good to know who your market is and – even better – to appeal directly to said market on their turf. This story’s been out for a couple of years now, but it always makes me laugh when I hear about it. Funnier still is the fact that, apparently, there is even a special brand of weed one can buy at one of these dispensaries aptly named “Girl Scout Cookie.” So I guess that means you can smoke your Girl Scout Cookie and eat it too!

And now my mind is officially blown!

Yep. It’s a brave new world, all right – and I’m not sure it’s getting any better. Since it’s already the 31st and there’s nary a Girl Scout to be found on my block, I guess that means the cookies aren’t coming this year. So, wish me luck, Wayward Friends – I’m off to make a Girl Scout Cookie run. Like Ross from Friends, I may need to head toward the nearest college dorms!