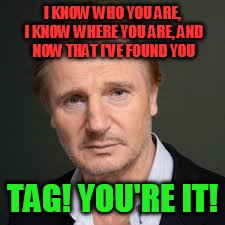 If I have any readers left, the hives are still keeping me fairly miserable, which is why y’all haven’t heard from me in awhile — brain isn’t working well, itching with what Lille Sparven has deemed — “blistering hordes of fuckwads” — God, I love that description! Thank you, my friend, because that is exactly what I’m dealing with. Anyway, I’m doing a lot of sleeping because — BENEDRYL — the only thing that even remotely takes the edge off! I was recently diagnosed with Chronic Idiopathic Uticaria aka chronic hives, unknown cause. So I continue to wait on the insurance company to let me and my doctor know when I can begin the intensive and expensive treatment recommended, which is Xolair shots. They run something like close to $1,000 per shot. Is that not just fucking crazy? My doctor would like me to take shots twice a month. As if I had that kind of money. Ha! Treatment will either attempt to kill me through anaphylaxis or it will work wonders. At this point, anything is better than what I’m going through right now.  Anyway, that’s a topic for a different post. I’m alive but barely kicking. Depression has set in. And I’m back to waiting.

As some of my readers who are also bloggers might have noticed, I still check in on your blogs as frequently as I can — still not frequently enough, I’m afraid. I’m not witty or on top of my game right now, which sucks, but I still read as I’m able and when I’m feeling especially productive, I try to comment — all of which leads me to this post today. I have been tagged by Sarah Silvey at Fresh Hell to answer the three questions below. I feel honored and totally freaked out at the same time, because — brain ain’t working so good right now, exhaustion, itchy, irritable, etc. But I promised I’d try and answer them to the best of my ability. Don’t expect much. Then I’m supposed to tag three other bloggers and give them three questions. Anyway, here goes nothing —

I’m not sure I’ve had that yet. I may have and my mind has totally blocked it. That is a strong possibility. I’m sure I’ve spoken out of turn on many occasions, which would have gotten me in trouble, but that wouldn’t constitute worst public experience. I’ve blacked out and puked while I was blacked out and someone helped clean me up. However, I wasn’t really in “public” and I don’t remember any of it — having blacked out and all.  I was just told about it. Ah, my teenage years; how I don’t miss them. In a more “public” experience — once, the slip I was wearing under my skirt fell down around my ankles outside a restaurant when I went to lunch with a friend. The elastic just gave way. The group of guys that witnessed this bought me and my friend a drink for my trouble. I was in my twenties and was all that and a box of chocolates, if you know what I mean — so I was slightly embarrassed, but it wasn’t completely mortifying. I got a drink out of the deal, a good reason to stop wearing slips, and a story out of it as well. Of course, I stopped wearing slips after that; and, of course, I tripped and fell this past fall and when I went down,  my dress went above my waist and exposed my panties. Only one other person witnessed this though. I gotta admit, down on the floor, the thought did cross my mind that I wished I was wearing a slip. Probably my worst imaginable public experience would be that I was speaking in front of a group (terrifying enough on its own) and I sneeze really loudly and snot all over myself as well as pee my pants (or worse) all at the same time. Because my body is getting to that point where it’s not exactly trustworthy anymore, ya know? Ah, I’ve got it. Back in the 1990’s, I was very new at writing and I joined a weekly writers group that met at a Barnes and Noble. I’d read just a couple of times and had gotten some very positive feedback. The third time I read, however, this very angry and annoyed writer (he really was quite a good writer of fiction) expressed his vitriol towards me and wondered why I even bothered writing at all. He decided that I was wasting my time, his time and everyone else’s time because I wasn’t good at it. No one in the group came to my defense. My cheeks burned for hours. Later I was told that this writer was a “slash and burn artist.” He enjoyed tearing down other people in this group, but the “rules” of the writers group were that you simply had to sit and listen to what each person said without argument. You were not allowed to respond no matter what was said. I tried to not let his words get to me, but I was crushed and I didn’t write again for at least ten years. Yep, that was bad. Really bad.

2. If you were made the dictator of your country, what would you try to change first, and how?

So, the first thing I would do is sit down because I’d be having a heart attack; promptly followed by my abdication because that just isn’t my thing and I refuse to be a  dictator. I have enough trouble running me. Who the fuck wants to run a whole country? And be blamed for every fucking thing that goes wrong? Or to have to be beholden to others because that is what is expected of you? The idea makes me cringe. I’m more about trying to stay under the radar. When you speak of change, though, I’m also all about being “the change you wish to see in the world” as trite as that may be. How else ya gonna be genuine if you don’t? The way I look at it, you can’t change minds unless hearts change first. And the best way to change hearts is just to be the best you that you can be and maybe that might touch someone’s heart enough so they at least reconsider something unhealthy for something healthier. And yeah, some people just don’t have a heart or a mind or either to change. Or they’re extremely complicated aka a pain in the ass. Also, truly, no one else can actually change another as hard as they might try, unless drugs and torture are involved. Again, not interested in any of that, so I’ll leave that sort of thing to people who don’t have consciences and are into that kind of thing. But for the torture/drugs thing, you really can only change yourself and hopefully influence others in a positive way. And that’s pretty damned hard most of the time. So there’s that. I have known to be extremely good at guilting and shaming others in past years. I’ve given that up…mostly. Things usually go awry when you’re manipulating others using guilt or shame. I know how to do it well, though, and if there comes a time that I have to put it back into my arsenal as a strategy, it’s good to know it’s there. Otherwise, it’s all headache-inducing nonsense as far as I’m concerned! So everyone be free or go dictate yourself! WooHoo!

3. What kind of monster is hiding under your bed?

Usually, the one who has four legs, a tail, and often answers to the name Buddy. He’s been known to eat things that don’t belong to him and also tear things up that don’t belong to him. I know he’s a monster because only a monster can create the smells that waft up around us at night as we try to sleep while he’s under the bed and won’t come out because he doesn’t want to go to his crate. Still, he’s kinda cute and I wuvs him — stupid damned dog!

The three questions I have for those I’ve tagged are not all that original, but —

Okay, technically, that’s probably more than three questions. Oh well. Answer what you want and if there’s a better question you’d rather answer than one of the three I provided, you can substitute it with your own if you want.

Per Fresh Hell, here are the rules —

♦ Answer the questions you receive (straight, funny, absurd…up to you)
♦ Create three questions of your own (for those you tag)
♦ Tag three people

From Adie With Love